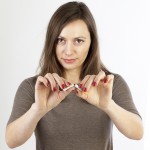 There is a high rate of co-morbidity between depression and smoking; rates of smoking are approximately double in those with depression compared with the general population.

In addition, smokers with depression tend to have higher rates of nicotine dependence, suffer greater negative affect during abstinence/withdrawal, are more likely to fail in quit attempts, and are therefore more at risk of smoking-related morbidity and mortality.

Given such issues, it is important to identify ways to make smoking cessation more successful in this patient population; however, health professionals don’t often encourage these patients to quit as they believe depressive symptoms may get worse. The evidence actually suggests the opposite; depressive symptoms are likely to get better in individuals who successfully quit smoking. Given the associations between smoking, smoking relapse and depression, a Cochrane review was recently published which brings together and examines the existing evidence on smoking cessation programmes with and without mood management components (van der Meer et al., 2013). The review aimed to determine the effectiveness of smoking cessation interventions, with and without mood management components, in smokers with current or past depression.

Out of 106 studies reviewed, the Cochrane meta-analysis included 49 trials. Included studies were RCTs testing the effectiveness of pharmacological or psychosocial interventions for smoking cessation in smokers with current/past depression. Study participants were adult smokers with current/past depression, defined as major depression (DSM-IV) or depressive symptoms (measured by scales such as Beck’s Depression Inventory).

Dichotomous treatment outcomes were measured via risk ratio (RR), which is calculated by:

An RR greater than 1.0 favours the intervention group (95% confidence intervals [CI] of the RR are also reported).

The primary outcome of interest was smoking status at a minimum of six months from first quit day.

The authors used ‘sustained cessation rates’ where available, i.e., continuous abstinence from quit date or prolonged abstinence (may include lapses which are not regarded as treatment failure). Participants lost to follow-up were assumed to be continuing smoking. Patients with past depression

Some trials investigated the effects of other pharmacotherapies (e.g., naltrexone) and psychosocial treatments (e.g., nurse staged care), however, due to the heterogeneity between trials, no pooled effects could be estimated.