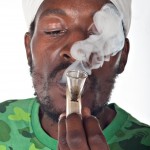 Smoking higher-potency cannabis may be a considerable risk factor for psychosis according to research conducted in South London (Di Forti, et al., 2015).

Cannabis is the most widely used illicit drug in the UK and previous research has suggested an association between use of the drug and psychosis, however the causal direction and underlying mechanism of this association are still unclear.

This recent case-control study published in Lancet Psychiatry, aimed to explore the link between higher THC (tetrahydrocannabinol) content and first episode psychosis in the community.

To compare the impact of THC content on first episode psychosis, participants were asked whether they mainly consumed skunk or hash. Analysis of seized cannabis suggests that skunk has THC content of between 12-16%, while hash has a much lower THC content ranging from 3-5% (Potter, Clark, & Brown, 2008; King & Hardwick, 2008).

Cannabis hash and skunk have very different quantities of the active THC component. Government figures suggest 5% in hash and 15% in skunk.

The researchers used a cross-sectional case-control design. Patients presenting for first-episode psychosis were recruited from a clinic in the South London and Maudsley NHS Foundation Trust; patients who had an identifiable medical reason for the psychosis diagnosis were excluded. Control participants were recruited from the local area using leaflets, internet and newspaper adverts. There were 410 case-patients and 370 controls recruited.

Researchers gathered data on participants’ cannabis use in terms of lifetime history and frequency of use as well as type of cannabis used, i.e. skunk or hash. Participants were also asked about their use of other drugs including alcohol and tobacco, as well as providing demographic information.

The case-patients and control participants were different in a couple of key areas (note: psychosis is more common in men and in ethnic minorities):

Participants with first episode psychosis were more likely to:

A logistic regression adjusted for age, gender, ethnic origin, number of cigarettes smoked, alcohol units, and lifetime use of illicit drugs, education and employment history showed that compared to participants who had never used cannabis:

A second logistic regression was carried out to explore the effects of a composite measure of cannabis exposure which combined data on the frequency of use and the type of cannabis used. Compared with participants who had never used cannabis:

The population attributable factor (PAF) was calculated to estimate the proportion of disorder that would be prevented if the exposure were removed: These findings support efforts to raise awareness among young people of the risks associated with the use of high-potency cannabis.

The results of this study support the theory that higher THC content is linked with a greater risk of psychosis, with daily use of skunk conferring the highest risk. Recruiting control participants from the same area as the case participants meant that the two groups were more likely to be matched on not only demographic factors but also in terms of the actual cannabis that both groups were consuming.

The study has some limits, such as the cross-sectional design which cannot be used to establish causality. Also the authors have not included any comparison between those who smoke hash and those who consume skunk so no conclusions can be drawn about the relative harm of hash.

Media reports about the study have mainly focussed on the finding that ‘24% of psychotic disorders are attributable to high potency cannabis use’. This figure was derived from a PAF calculation which assumes causality and does not allow for the inclusion of multiple, potentially interacting, risk factors. Crucially the PAF depends on both the prevalence of the risk factor and the odds ratio for the exposure; the PAF can be incredibly high if the risk factor is common in a given population.

In this case, the prevalence rate of lifetime cannabis use was over 60% in both participant groups. According to EMCDDA, the lifetime prevalence of cannabis use in the UK is 30% among adults aged 15-64, so it is arguable that this study sample is not representative of the rest of the UK. The authors themselves note that “the ready availability of high potency cannabis in south London might have resulted in a greater proportion of first onset psychosis cases being attributed to cannabis use than in previous studies”, which is a more accurate interpretation than media reports claiming that “1 in 4 of all new serious mental disorders” is attributable to skunk use.

Future studies looking at the relationship between cannabis and psychosis should also aim to differentiate high and low potency cannabis. Longitudinal cohort studies are particularly useful as they have the same advantages as a case-control design but data about substance use could be more reliable as ‘lifetime use’ can be gathered from multiple measurements collected at a number of time points across the lifetime. The innovative psychosis research conducted by this group led by Prof Robin Murray, is the first to distinguish between different potencies of cannabis in this way.