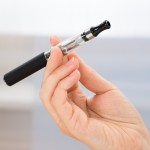 Arguments about electronic cigarettes (e-cigarettes) and what do about them rumble on. I won’t wade into the broader debate, but I direct you to a recent viewpoint article (McKee and Capewell, 2015), and accompanying commentaries (particularly McNeill et al., 2015).

The main arguments involve the safety of e-cigarettes (relative to smoking regular cigarettes and relative to, well, breathing air), their effect on renormalisation of tobacco smoking when its prevalence is declining, their role as smoking cessation aids, and their use by young people.

The present article is related to the latter issue, specifically the worrying possibility that use of e-cigarettes by young people may make them more likely to progress to smoking regular cigarettes in the future.

Last year I wrote about a cross-sectional study which showed that American youth who used e-cigarettes were more likely to smoke regular cigarettes and less likely to quit smoking than others who did not use e-cigarettes (Field, 2014). This study caused quite a stink at the time, largely because it was interpreted as evidence for the claim that e-cigarettes may be a ‘gateway’ into tobacco smoking for young people, although various commentators were quick to point out that the findings didn’t imply that at all. A subsequent longitudinal study (Leventhal et al., 2015) demonstrated that use of e-cigarettes among American high school students was associated with subsequent progression to use of regular cigarettes, although the authors of that study emphasised that this does not mean that e-cigarettes play a causal role. 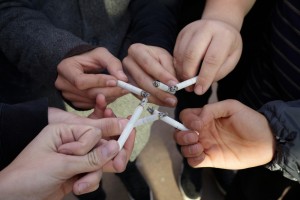 Currently there is no evidence showing a causal link between e-cigarette use and subsequent progression to use of regular cigarettes.

This is a longitudinal cohort study in which 694 non-smoking participants aged between 16 and 26 (mean age = 20 years; 54% female) provided information about their use of e-cigarettes and regular cigarettes, and their ‘susceptibility to smoking’, via a telephone survey.

‘Susceptibility to smoking’ was determined based on responses to questions about whether they might smoke a (regular) cigarette in the next year.

Participants provided this information at a baseline assessment that took place between October 2012 and May 2014, and then provided it again at follow-up, one year later.

At the baseline assessment, 16 participants (2.3%) had ever used e-cigarettes, and were thereafter referred to as ‘E-Cig users’. Of these, six people (37.5%) progressed to being a ‘cigarette smoking initiator’ (defined as taking at least one puff on a regular cigarette in their lifetime) at follow-up, as opposed to only 65 individuals (9.6%) who were not E-Cig ‘users’ at baseline. An additional five individuals (31.3%) who were e-cigarette users at baseline were classified as ‘increasingly susceptible to smoking’ at follow-up, as opposed to 63 individuals (9.3%) who were not e-cigarette users at baseline.

The predictive validity of e-cigarette use at baseline for regular cigarette smoking and susceptibility to smoking at follow-up were confirmed with a series of multivariable multinomial logistic regression analyses that used different methods to deal with missing data and inconsistent responding from participants.

In these analyses, progression along the cigarette smoking trajectory from baseline to follow-up was the dependent variable, and predictor variables were e-cigarette use at baseline alongside age, gender, race / ethnicity, maternal education, sensation-seeking, and cigarette smoking in parents and friends. These analyses confirmed that: 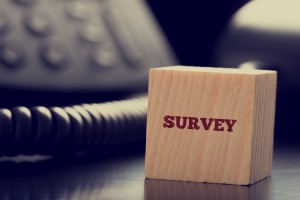 This study of 694 non-smoking 16-26 year olds, used telephone surveys to gather information about e-cigarette and regular cigarette use and intention to use.

The headline finding is certainly alarming: among young non-smokers, use of E-cigarettes was associated with more than an 8-fold increase in the likelihood of progressing to smoking regular cigarettes one year later. This finding is consistent with findings reported in another recent study (Leventhal et al., 2015) and both sets of results go beyond findings from a cross-sectional study that I wrote about last year, because they establish temporal precedence (some people are using E-Cigs before regular cigarettes) and because they control for sensation-seeking, a variable that is likely to influence use of both E-Cigs and regular cigarettes.

Primack et al’s discussion of their findings is appropriately cautious, and they make the valid observation that attempts to market E-Cigs to youth may be cynically motivated by the desire to get the next generation addicted to nicotine and ensure their progression to smoking regular cigarettes.

However, an accompanying editorial in the same issue of the journal (Klein, 2015) threw caution to the wind and concluded that:

these products (e-cigarettes) harm nonsmokers and result in a net harm to society and public health.

At a time when many claim to be uncertain about harms and benefits of e-cigarettes and argue for more studies, these data provide strong longitudinal evidence that e-cigarette use leads to smoking, most likely owing to nicotine addiction. We no not need more research on this question; we have the evidence base… 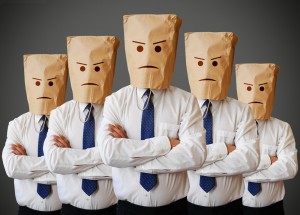 The interpretation of this data by some commentators has been misplaced and alarmist.

Klein’s comments are ridiculous. While this study makes an important contribution, it does not provide strong longitudinal evidence that e-cigarette use causes smoking. These are some of the reasons why:

More research is needed (in this case, this really is a valid conclusion). 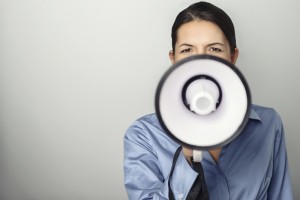 More evidence-based research is needed before we can make any clear cut judgements about e-cigarettes and progression to smoking regular cigarettes.

McNeill A, Brose LS, Calder R, Hitchman SC, Hajek P, McRobbie H. (2015). Evidence about e-cigarettes: They are much safer than cigarettes and do not lure children to smoking. BMJ (this is a response to McKee & Capewell, above).