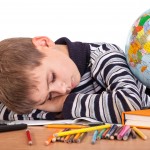 Good sleep is a crucial part of our physical and mental well-being. We typically spend about a third of our lives asleep but when we miss out on sleep, we can feel fatigued and struggle to concentrate. Sleep problems are generally quite common and have been reported as one of the most common health conditions in individuals with attention deficit hyperactivity disorder (ADHD).

It is possible that sleep disturbances make ADHD symptoms worse in affected children and adolescents or even result in ADHD-like behaviours. As such, it is important to consider treatment of sleep problems in children and adolescents with ADHD. Improving sleep quality has the potential to reduce ADHD problems and to have a positive impact on everyday life of the affected individuals, as well as their families.

In order to perform a clinical review of the research literature on the assessment, treatment and management of sleep problems in children with ADHD, the authors of a recent literature review searched a number of databases (PubMed, EMBASE, and Web of Knowledge) for relevant research. The literature search turned up 139 relevant articles, 22 of which directly assessed treatment of sleep problems in children with ADHD.

The authors report that possible causes of sleep problems may include specific sleep disorders (for example sleep apnea or “restless legs syndrome”), poor sleep routines, oppositional and defiant behaviours, anxiety or mood problems, medical conditions (for example asthma), side effects of ADHD medications or the ADHD symptoms themselves.

The authors make the following recommendations for clinical practice:

Before other methods are considered, the authors stress that it is important to try to implement healthy sleep practices, such as: Children with ADHD who have trouble sleeping are likely to benefit from relaxing pre-bedtime activities like story time.

Such behavioural strategies should ideally be adapted for children with ADHD (for example by providing the instructions for the routine one step at a time). Although such strategies may be necessary steps in improving sleep, the authors state that they may not be sufficient for all children.

If behavioural treatments are not effective, for example in cases of insomnia, use of orally-administered melatonin may be considered, as there are several drug trials showing the benefits of this medication. There is currently no robust evidence for the effectiveness of other medications.

If it is suspected that sleep problems are the side effects of medications, the authors point out that it could be worth trying alternative dosages, dose regimens, formulations, different medications, or administering melatonin alongside the other medication (recommendation based on clinical consensus of authors).

Co-occurring disorders (such as anxiety or oppositional behaviours), which may be affecting sleep need to also be considered and treated (recommendation based on clinical consensus of authors).

The authors did not include their search strategy in the review (apparently it’s available on request), so it’s hard to say whether or not their search was systematic and reliable. They also say that they decided not to include unpublished studies ”because, as pointed out by the Cochrane group, the inclusion of unpublished data may introduce bias”. In fact, the Cochrane handbook clearly states that “obtaining and including data from unpublished trials appears to be one obvious way of avoiding this problem [bias]”, although it also warns that “inclusion of data from unpublished studies can itself introduce bias” if the sample included is unrepresentative of all included studies.

The authors highlight a number of sleep problems and treatment options which could really benefit from further research. There is currently very little evidence for the effectiveness of many of the possible treatments, perhaps aside from melatonin, which appears to have been more widely researched in the context of ADHD.

Where the evidence was weak, they provide recommendations based on their clinical experience, which were agreed at a Consensus Conference supported by an unrestricted educational grant from Shire Pharmaceuticals, a company who produce drug treatments for ADHD among other things.

They also mention a number of ongoing RCTs into behavioural strategies in ADHD, which will be of interest once their results are published.

Sleep problems are very common in children and adolescents with ADHD and making an accurate diagnosis is important.

The authors highlight that:

Before addressing the specific sleep disorder/condition, we recommend the implementation of healthy sleep practices as the foundation of sleep problems management.

In addition to behavioural strategies, the most robust support comes from the use of orally-administered melatonin. To date, there is limited evidence for other medications and for non-pharmacological therapies (behavioural, light therapy or chronotherapy).

It appears that it is early days for this research area. Hopefully, as further research is carried out, appropriate treatments will be found for the many children with ADHD who suffer from sleep problems.