Home » Posts » Mental health » PTSD » Pharmacotherapy for PTSD: an update on the evidence finds some efficacy but small effect sizes 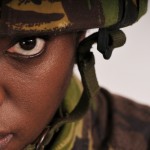 [Note: this blog was published on 6/5/15 and amended on 7/5/15. As a shining example of crowd sourced peer review in action, a duplication was spotted by an attentive reader, which affects the results of the meta-analysis. The authors of the meta-analysis were contacted, they promptly responded, and updated results were given. The update is explained in more detail in the results section below.]

I should declare a couple things here.

Secondly, I’m a psychologist. Which in some respects means that my preference and knowledge both centre around psychological treatments over pharmacological. However, despite a lot of recent tribalism (See Mental Elf’s brilliant reflections on the issue here) I firmly believe healthcare benefits from plurality, and people should have a choice of treatments that work for them, be they psychological or not.

Having said that, psychological treatments, namely TF-CBT or Eye Movement Desensitisation and Reprocessing (EMDR), are favoured, at least in England, as first line treatment recommendations for PTSD, whereas pharmacotherapy is recommended as a second-line intervention in certain circumstances, for example, where the person expresses a preference against TF-CBT, or where there is serious threat of ongoing trauma, or in the treatment of sleep difficulties (see NICE, 2005). In Australia, similar conclusions were recently drawn in updated guidelines (ACPMH, 2013).

However, in light of updated evidence and new DSM-V criteria for PTSD, the NICE guidelines are currently being reviewed. So at least in England, these recommendations may soon change.

With all this in mind, I was intrigued to review a recent systematic review and meta-analysis published in the British Journal of Psychiatry, exploring the efficacy of pharmacotherapy for the treatment of PTSD (Hoskins et al, 2015). Essentially, this paper serves as an update on the evidence since the 2005 NICE guidelines were produced. 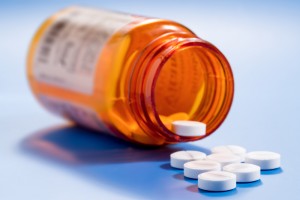 In the UK, drug therapy is very much a second-line intervention (behind talking treatments) for people with PTSD.

All double-blind, randomised, placebo-controlled comparative trials of the efficacy of pharmacological interventions for PTSD were included. Many of these were also included in the original NICE guidelines and Cochrane review conducted at the time (Stein et al., 2006).

Trials were excluded if TF-CBT was initiated or ongoing. Open label trials were also excluded.

Studies focused on a range of traumatic incidents. Primarily these were combat and physical/sexual assault. A smaller number of studies focused on natural disaster and road traffic accidents.

The majority of trials studied SSRIs (31), with the others investigating tricyclics, monoamine oxidase inhibitors, and other antidepressants.

Associate Professor at the Oxford University Department of Psychiatry, Andrea Cipriani, got in touch with the Mental Elf via email, alerting us to the possibility that two pairs of studies included in the meta-analysis appeared to have highly similar characteristics on the funnel plot (see figure 1). He also posted the following on the blog page:

Looking at the original paper by Hoskins et al., 2015… it seems to me that the authors counted twice in the forest plot two studies (namely, Eli Lilly as the same study as Martenyi 2007 and Pfizer 589 as the same as Friedman 2007).

It would be nice if the authors (and the journal) could clarify this issue. 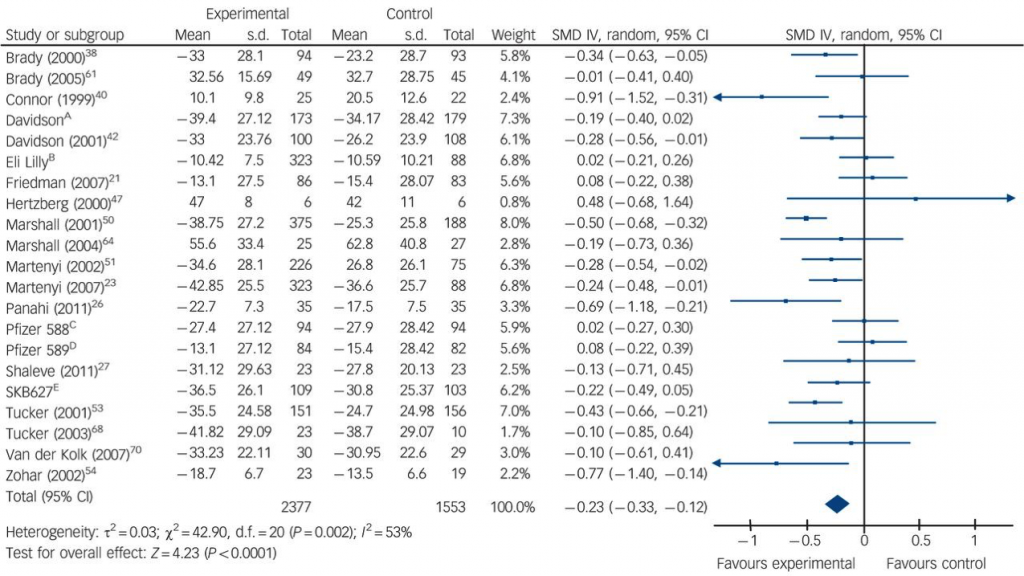 Indeed, although not identical, both pairs of studies showed highly similar characteristics.

We pursued the issue by posting comments on the blog and approaching the authors of the review via twitter. Mat Hoskins (co-author) responded very quickly, via a blog comment, with the following:

Hi Prof Cipriani, many thanks for your comment, you were quite right and we did send a reply back to BJP. The meta-analysis now shifts in statistically significant favour for sertraline, in addition to paroxetine, venlafaxine and fluoxetine.

So essentially, the duplicated trials changed the outcome of the meta-analysis, most notably by removing one of the included studies reporting that sertraline performed worse than placebo. In doing so, sertraline became significantly favoured to placebo overall.

The interesting power of placebo

This could almost be a heading of its own in pharmacotherapy trials. Its fascinating. In this case, placebo accounted for over 40% symptom reduction in some trials, however this varied. 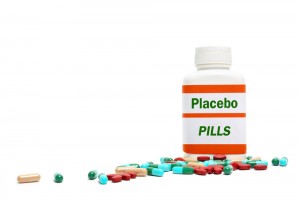 The evidence was strongest for fluoxetine, paroxetine and venlafaxine, as these were the only drugs that were statistically superior to placebo.

This systematic review found statistically significant evidence on meta-analysis for three pharmacological agents v. placebo in the treatment of PTSD (fluoxetine, paroxetine and venlafaxine) but no evidence for brofaromine, olanzapine, sertraline or topiramate.

[Although since the amendment, sertraline is now favoured v. placebo as well].

However, they also observe that the effect is small in comparison to certain psychological treatments:

However, the authors raise a useful point. Because the included trials focused on monotherapy interventions, they were unable to conclude as to whether pharmacotherapy can augment psychological interventions for PTSD. This would be valuable information, given many people receive both. 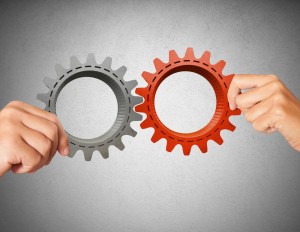 Combined psychotherapy and antidepressant treatment works well for many mental health conditions, but this review does not tell us if this combination may also work for PTSD.

There was considerable clinical and statistical heterogeneity between studies included in the meta-analysis.

Despite all 51 studies describing themselves as double-blind, only eight studies adequately report on the process in order to adequately determine low risk of bias (according to the authors).

Also as the authors point out, because only a number of studies (41 of the 51) included intention to treat (ITT) analyses, there is a risk of publication bias in terms of outcome reporting, particularly if participants withdrew from trials due to adverse effects, greater severity of symptoms or a perceived lack of efficacy.

This review provides a useful update on the evidence included in national guidelines for supporting people with PTSD in the UK. Certain SSRIs appear effective, though effect sizes are smaller than recommended psychological treatments. Only paroxetine was significantly superior to placebo on both clinician and patient-rated measures.

We aren’t able to ascertain the efficacy of combining these treatments and study limitations were evident.

Also, it raises an interesting question about what precisely is being treated in PTSD, which isn’t answered by the review. Certainly psychological interventions will at least in part be designed to confront and update the trauma memory and, in the case of TF-CBT, develop strategies to manage the difficult thoughts and associated feelings (see Ehlers et al., 2005). SSRIs, it seems, are aimed at a symptom level. Again, provided there is evidence for the efficacy of both, patient choice seems important here.

It will be interesting to see what changes, if any, are made when the NICE guidelines for PTSD are updated. 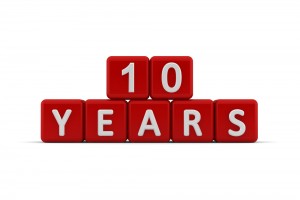 It’s been a decade since the NICE PTSD guideline was published, so it’ll be interesting to see if this new evidence encourages an update.

Reflections on the amendment