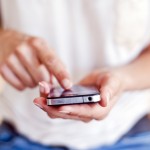 In case you hadn’t noticed, we elves are keen on using this here electronic inter-web thingy, because we think it’s a good way to share information.

By extension, we wonder whether it might also be a good way to deliver therapy; quickly, easily, and cheaply, to lots of people all over the world. Other elves have blogged about the evidence for using such technology to help people stop smoking (Munafò), stop drinking (Jones & Field), treat depression (Newhouse), treat chronic somatic conditions (Cristea), and, indeed, treat eating disorders (Steele, paper by Dolemeyer et al, 2013).

Many people are surprised to hear how prevalent eating disorders are: one recent study found that they affect more than 1 in 20 female adolescents (Smink et al, 2014). Given this prevalence, it would be great if there were easily “scalable”, evidence-based e-therapies to treat them. Such therapies might make use of the Internet, “apps”, computers, tablets, phones, maybe even wearable tech.

This new paper isn’t the first systematic review and meta-analysis of such therapies, but it is worth a read – it is the first to use the same criteria that NICE uses when investigating new treatments (Loucas et al, 2014). These rigorous criteria result in a considerably less optimistic conclusion than the paper covered by the last blog on this subject (Steele, paper by Dolemeyer et al, 2013). 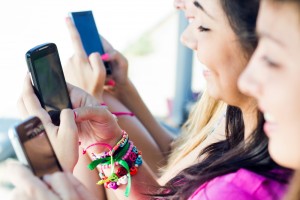 With an estimated 1 in 20 teenage girls affected by an eating disorder, the opportunity for a digital solution to prevention and treatment is huge.

The authors used PRISMA guidelines to conduct a systematic review and meta-analysis of all RCTs of e-therapies designed to prevent, treat or prevent relapse to eating disorders. E-therapies were defined as “interventions that were primarily delivered via a computer, mobile phone or tablet” via “the Internet, downloadable software, CD-ROMs and mobile device apps”. They searched multiple databases, checked reference lists in included studies, and conducted a manual search for registered but unpublished trials.

They used the Cochrane risk of bias tool to assess risk of bias in each study and the structured “GRADE” approach to assess the quality of the evidence in each trial, to give a measure of confidence in the reported effect size.

Sadly they excluded trials not published in English.

In all, 20 trials were eligible for inclusion, of which 14 could be appropriately combined in a meta-analysis:

Confidence in the effect estimates is described as moderate to very low, largely due to risk of bias. 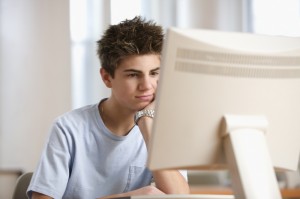 The authors conclude that the evidence base is small and

They suggested that the online prevention program “Student Bodies” is associated with a modest reduction in eating disorder symptoms, but whether this has a meaningful effect on subsequent prevention of eating disorders has yet to be established.

They bemoan the fact that none of the available treatments make use of the potential strengths of the Internet (over, for example, books): the ability to design treatments which are interactive and personalized. And they highlight the potential harm of people using non-evidence based apps thinking that they are treating their eating disorder, when really they should be seeking proper help.

Dull as it is to have to agree with the authors so completely, it is hard to find fault with this thorough critical appraisal of the evidence. 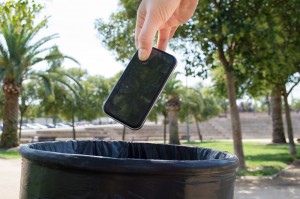 This research is not suggesting we trash our smartphones, but it’s certainly a long way from extolling their virtues in terms of e-therapy for eating disorders.

These new technologies have become part of our life in almost all areas (Trying to find a new house? There’s an app for that; Want to turn your oven on before you get home? Send it a text; Lost in an unfamiliar city?…See that blue dot on the map on your phone?) and e-therapies seem a bit behind the curve. Most of the interventions studied here have just put existing therapies onto a computer.

The authors bemoan the fact that none of the available evidence-based treatments make use of the potential strengths of the Internet: the ability to design treatments which are interactive and personalized. Another potential use of wearable technology and smart phones is the ability to gather lots of information about ourselves on a daily basis. This might help both patients and clinicians build a more accurate picture of, for example, meals eaten, activity levels, mood, and sleep.

Of course, a quick Google search tells us there are apps “for eating disorders” out there, and they may be effective; the trouble is we don’t know whether they are or not. The difficulty is that the Internet can move so quickly and so inexpensively, whereas properly conducted RCTs are expensive and rather slow. It’s clear that digital mental health entrepreneurs and researchers need to bridge the gap between agile development and evidence-based research methods. Is there a happy medium here?

The reviewers sound a note of caution by highlighting the potential risk of people using non-evidence based apps, thinking that they are treating their eating disorder, and this delaying them seeking evidence-based help.

We need to think about how we can develop novel e-therapies, and how we can check that they are safe and effective in a timely way. The only thing I’ve tried using any sort of new technology for in my practice is inviting adolescents and their families to bring in smartphone photos of meals if there is a disagreement about what constitutes a “normal” portion.

It would be fascinating to hear what other clinicians and families have tried, and your ideas for new interventions. Please use the comments feature below to share your thoughts. 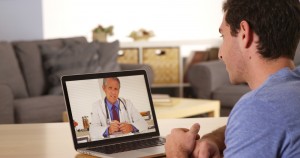 Please share your examples of digital solutions that support people with eating disorders.

Dolemeyer R, Tietjen A, Kersting A, Wagner B. Internet-based interventions for eating disorders in adults: a systematic review. BMC psychiatry. 2013;13:207.

Last reply was January 21, 2016
Try out our members features!