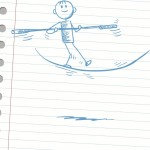 The authors scanned important medical databases and journals for relevant studies, including ongoing or unpublished work. This boiled down to 20 primary trials comprising 2,918 patients. Risk of bias and study quality was assessed by independent raters. No publication bias was found.

Drug response was defined as minimally 50% decrease on a depression questionnaire 12 weeks after treatment start, while remission was classified as having sub-threshold scores. Dropout or experience of adverse effects was taken as a measure of drug acceptance. Benefits ratios (BRs) and odds ratios (ORs), 95% confidence intervals and numbers needed to treat (NNT) were calculated in accordance with statistical guidelines. Similar results were obtained in terms of efficacy for both SSRIs and TCAs. […] In terms of acceptability, results demonstrated the superiority of SSRIs, as TCAs yielded significantly higher rates of dropouts and adverse events. Sample sizes varied greatly, from 15 to 635, possibly leading to false negatives in underpowered studies and biasing of effect sizes. Moreover, female patients were overrepresented and there was heterogeneity in terms of age (34-69.9 years) and drug dosage regimen. In 6 of the 20 included studies, von Wolff et al. found a high risk of bias and in a further 10, assessment was not possible due to lack of information. Additionally, many studies did not report all outcome measures. For instance, only 4 studies comparing SSRIs to TCAs mentioned dropout rates.

Clearly, the results of this meta-analysis show possible benefits of using antidepressant medication in chronic forms of depressive disorders. In particular, they suggest SSRIs to be superior TCAs, not because of increased efficacy, but higher acceptability. However, when keeping the above-mentioned limitations in mind, it is clear that these conclusions are tentative. It is equally clear that more research in this area is desperately needed to ensure patients receive the best evidence-based treatment for their condition.