Home » Posts » Mental health » depression » “Everyone’s a winner, all must have prizes!” but which psychotherapy for depression wins, if any? 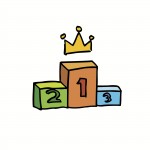 Previous meta-analyses in the field of depressive disorders have yielded mixed conclusions about which the most efficacious treatment is.  Within the process of any therapy, there are universal features such as; the therapeutic relationship, rationale for treatment, a patient and therapist belief in treatment, a confidential and respectful space for the patient and so on.  However, individual to each psychotherapy there will also be specific factors such as for example; the use of behavioural experiments in CBT or the focus on the patient/therapist relationship in psychodynamic therapy.

Using a systematic search strategy the reviewers identified 53 papers which were appropriate for inclusion.  Studies included were published between 1977 and 2012, including 3,965 patients of which 70.6% were female.

Independent effect sizes (converted to Hedges g in order to adjust bias due to small sample size; 0.20 is considered small, 0.50 medium, and 0.80 large) were calculated for the five outcome measures: This meta-analysis searched for clarity about which psychotherapy for depression is best: they’re similar yet different

Meta-analysis I included only therapies where there were 5 or more comparisons available and found:

Meta-analysis II allowed for analysis of previous grouped together SUP therapies and using CBT as a comparison treatment:

Our results suggest that the dodo bird verdict seems to be the right answer for the wrong question.  Even though it seemed mostly corroborated at the aggregate level, there appear to exist a number of differential effects in efficacy between bona fide treatments of depression at a finer level.

The results of the meta-analyses showed small effect sizes for the differences between psychotherapies, effectively suggesting that (of the therapies included in this review) there is not one therapy which stands out as yielding better outcomes.  However, results do throw up some interesting questions about the moderating effects of; participant age, therapy format, patient gender, nature of disorder and comorbidity.

The limitations of this review impede any firm conclusions being drawn:

In essence the most comprehensive conclusion to be drawn is that more research into psychotherapies for depression is needed.  This would allow for more therapy specific meta-analyses which might yield results that have more clinical significance.  This is no mean feat however, after all, this review highlights the challenge of being able to define and measure the many nuances of therapy and their relative contribution to each therapy session.

This review found only small differences between the various psychotherapies