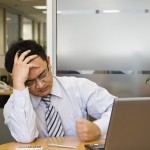 In these times of austerity, there is a lot of interest in computerised cognitive behavioural therapy (cCBT) as a treatment for people with depression and anxiety. It is hoped that this cheap and easy to deliver intervention can help to reduce the long waiting lists for face-to-face talking treatments.

I’ve regularly blogged about cCBT over the last few months as the studies have been coming thick and fast. It’s a treatment that has been approved by NICE, but we have not yet seen a trial that confirms the effectiveness of this intervention in the UK workplace.

The British Occupational Health Research Foundation have now published their final report of a randomised controlled trial that investigates the effectiveness of one of the most popular cCBT interventions (MoodGym) in a population of depressed employees from BT, Transport for London and the NHS.

The trial randomised people to one of two interventions:

Patients were followed up for 12 weeks and outcomes were measured at 6 weeks and 12 weeks.

The main outcome (work-related performance) was measured with the Work and Social Adjustment Scale. Outcomes of interest included depression, anxiety, cost and the acceptability of the intervention.

Patients with severe mental health problems (e.g. psychosis or bipolar disorder) were included in the study, which is unusual for a cCBT trial such as this.

So, what’s going on here? Why didn’t the cCBT intervention do better in this trial?

One of the key issues is the comparison intervention. RCTs often compare an active treatment to treatment as usual, which in this case would have been standard GP care (with antidepressants). The control treatment in this trial is informational websites and weekly telephone calls, which as you might expect had a positive impact on the mental health of participants. The authors mention the REEACT trial, which is currently underway with a 3-way trial design: Beating the Blues with GP care v MoodGYM with GP care v GP care only (details can be found at: http://www.controlled-trials.com/ISRCTN91947481) and it’ll be interesting to see the findings from that study.

It’s also possible that people just got better of their own accord, rather than because of the treatment they were receiving (spontaneous remission), or that regression to the mean had an impact; this occurs when there is a combined effect of measurement error and the inclusion criterion, i.e. people get better on the rating scale irrespective of which treatment (or none) is given.

The authors also suggest that giving people more cCBT may have had more impact, although their analysis shows that patients who were high users did not see greater benefits.

It’s worth noting the low retention rate in the study (56% at six weeks, 36% at twelve), which is a common problem for online trials such as this, as the researchers are relying on the commitment of patients. An intention to treat analysis was carried out.

Overall, this is a disappointing result for cCBT, despite the positive spin given to the results in the conclusions:

Users of MoodGYM took less time off work during the study period, leading to lower costs for employers. The qualitative comments from participants offer information for further development of Internet interventions to meet the continuing demand for cognitive behaviour therapy.