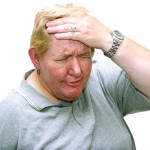 Self injurious behaviour is usually defined as behaviour that directly results in physical harm to an individual and includes such behaviours as hand biting, head slapping, picking at skin, gouging or striking the body or eating inedible material.  In addition, researchers have begun to include display of repetitive movements even though they may not immediately produce tissue damage.

The researchers in this study set out to describe and compare prevalence, topography and correlates of self-injury in people with autism spectrum disorder, Fragile X syndrome and Down syndromes. They were interested in the characteristics of individuals that might be associated with self-injury across and within these groups.

To look at this issue, they designed a questionnaire for carers to complete. The questionnaire was completed by carers of 149 people with autism spectrum disorder (ASD), 123 people with fragile X syndrome and 49 people with Down syndrome. The questions related to the presence and topography of any self-injury. In addition to the questionnaire, the researchers also gathered demographic information about personal characteristics, affect, autistic behaviour, hyperactivity, impulsivity and repetitive behaviour.

They found from these carer responses that self-injurious behaviour was displayed by 50% of the people in the sample with autism spectrum disorder, which was similar to those with fragile X syndrome at 54.5% but significantly higher than for those in the Down syndrome group which was at 18.4%.

Interestingly though, they found that self-injury was associated with higher levels of autistic behaviour within both the non ASD groups.

For the ASD group, they found that self-injury was associated with higher levels of impulsivity and hyperactivity, negative affect (observable behaviour representing expression of subjectively experienced feelings or states) and lower levels of ability and speech.

The authors conclude that given the rates that were reported by carers, self-injurious behaviour is prevalent in individuals with ASD. They also suggest that autistic behaviour might increase the risk of self-injury in people with other known genetic disorders but do not have a diagnosis of autism.

They also describe a number of person characteristics that they suggest are associated with self-injury which include impaired behavioural inhibition, low levels of ability and negative affect.

The findings  of this study seem to be consistent with previous studies, although carer observations may be subject to a range of variables.