Home » Posts » Learning disabilities » down syndrome » Carers of people with Down syndrome and dementia need access to information, review processes and futures planning 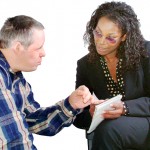 People with Down syndrome are more likely to develop dementia than those without and indeed this is more likely to occur at an earlier age, where clinical symptoms can occur when people are in their late 40s or early 50s.

There is also some evidence that there are some differences in clinical symptoms in people with Down syndrome and dementia when compared with people with learning disabilities due to other causes, with those with Down syndrome having a higher prevalence of mood changes, over-activity, auditory hallucinations and disturbed sleep.

The researchers in this study were interested in talking with carers of people with Down syndrome and dementia to help assess the impact of a specialist service which offered dementia screening and assessment and had developed to offer support and training for carers.

The aim of the study was to understand the ways in which carers made sense of their role and the way in which the specialist service could improve its support.

What they did was to carry out semi-structured interviews with family carers, relatives and staff covering the impact on them of caring for someone with Down syndrome and dementia and the ways in which the specialist service had supported them in their caring role.

They then analysed the contents of the transcriptions using a process of interpretative phenomenological analysis, an experiential qualitative approach which focuses on the lived experience of participants to try to make sense of the meanings of events or experiences states to the participants themselves.

They identified a range of themes including

Most respondents experienced significant difficulties caring for someone with Down syndrome and dementia, but that review meetings with professionals were very important to help them make sense of what was happening with their relative. They also wanted access to more information about dementia and in particular the way in which it presented in people with Down syndrome, both in written form, for example they suggested the creation of a booklet, but they also wanted professionals to spend time talking through the issues.

Unsurprisingly, a key theme was concern about the future and what would happen to their relative when they were no longer able to cope with the caring role.

The authors point out that as a result of the evaluation, several changes have been proposed and are in the process of implementation within the service.

The views of people who care for adults with Down’s syndrome and dementia: a service evaluation, Furniss K et al., in British Journal of Learning Disabilities, 40: 318–327.