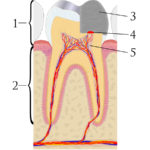 Exposure of the dental pulp lead to apical periodontitis requiring either root canal treatment of tooth extraction. Direct pulp capping can stimulate hard tissue repair and preserve pulp vitality.  Calcium hydroxide (CH) has been used as a pulp capping agent for nearly 100 years with success rates between 35-82% being reported. While mineral trioxide aggregate (MTA) was first used about 20 years ago with some studies reporting success rates as high as 95%.

The aim of this study was to compare effectiveness of MTA and CH as a direct pulp capping material in adult molars with carious pulpal exposure.

Patients aged between 18–55 years having a carious first of second molar with radiographic evidence of caries involving at least the inner 1/3rd of dentine with no periapical pathology were included.  Patients were block randomised to receive direct pulp capping using either MTA or CH.

Teeth were treated under local anaesthesia and rubber dam with initial cavity preparation carried out using high and low speed handpieces. Only hand instruments were used on the pulpal wall.  When exposed pulpal bleeding was controlled with cotton pellets soaked in buffered 0.5% NaOCl. Pulp exposures were treated with MTA or CH and temporary glass ionomer restoration placed for 1 week, after which permanently restored with composite resin.

Six different dentists performed the treatments with follow up at six, 12, 24 and 36 months. The primary outcome was the survival of capped pulps, defined as a non-symptomatic tooth that responded to sensibility testing and did not exhibit any periapical changes radiographically. Post-operative pain at 1 week was a secondary outcome.  Kaplan–Meier survival analysis was used to study the survival of the capped pulps.

Mineral trioxide aggregate was more effective than conventional CH dressing as a direct pulp capping material in molars with carious pulpal exposure in adult patients, although the baseline inflammatory status of the capped pulps could not be fully con- trolled in this study.

The power calculation for this well-designed study was initially looking to recruit a total of 160 patients but less than half this number were recruited because if the strict inclusion criteria. The recruitment period as it was extended to just under two and a half years although all but 5 of the recruited patients were reviewed at 3 years and a significant difference between the two treatments was demonstrated despite the lower than planned recruitment levels.  While this trial suggests good outcomes for direct pulp capping using MTA there is now evidence to support good pulpal outcomes using the partial or stepwise approach to caries removal (Dental Elf – May 25th 2017) and recent consensus recommendations support this approach.  ( Schwendicke et al 2016 ).