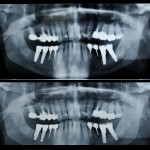 High success rates for dental implants have been demonstrated but a number of factors have been linked to implant failures. These include peri-implant disease, smoking, diabetes, and bisphosphonate use. The aim of this review was to compare marginal bone loss and the failure of implants during different follow-up periods between smokers and non-smokers.

Searches were conducted in the PubMed, Web of Science, and the Cochrane Central Register of Controlled Trials databases. Prospective and retrospective cohort studies, and randomised trials (RCTs) that compared the marginal bone loss and implant failure rates between smokers and non-smokers were considered. Two reviewers screened the studies, abstracted data and assessed study quality using the Newcastle–Ottawa scale (NOS). Binary and continuous variables from the studies included were analyzed through meta-analysis when the same type of data was assessed by at least two studies.   Binary outcomes were reported as odds ratio (OR) and continuous outcomes as standardised mean difference (SMD). Random or fixed effects models were used to pool data.

It is interesting to compare this review with one we considered earlier this year on the same topic (Dental Elf -13th May 2015). Both reviews have used similar databases for they searches but the earlier review has employed a much broader inclusion criteria for studies going on to include 107 studies compared with the 15 studies in this review. Both reviews report a high risk of implant failure and a greater degree of bone loss so there appears to be some consistency in the findings. However, because of the quality of the studies included in both reviews, certainty about the size of the effect of smoking is still lacking.