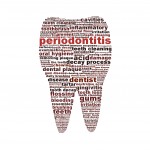 Chronic periodontitis is a common problem and its treatment and management is based on regular improving oral hygiene regiments together with routine scaling and root planing (SRP).  A wide range of adjunctive treatments have been recommended to improve the effectiveness of SRP including systemic antimicrobials, systemic sub-antimicrobial dose doxycycline (SDD), locally applied antimicrobials (chlorhexidine chips, doxycycline hyclate gel and minocycline microspheres.

The aim of this review was to provide comparative treatment effect estimates for non-surgical treatments of chronic periodontitis based on scaling and root planing with adjuncts.

This network meta-analysis (NMA) is based on studies included in the 2015 clinical practice guideline on the nonsurgical treatment of chronic periodontitis. Randomised controlled trials (RCTs) reporting changes in clinical attachment level (CAL) with at least 6 months follow up were included. Parallel-arm and split-mouth studies were included, but studies of aggressive periodontitis were excluded. 11 of the 72 studies included in the Guideline (Dental Elf – 21st Jul 2015) that compares scaling and root planing (SRP) against an untreated control group were excluded

Adjuncts improve CAL gain by about a third of a mm over 6-12 months compared with SRP alone, but no significant differences were found among the adjuncts. The patient-perceived benefit of this gain is unclear because CAL is a physical measure made by the clinician and not a patient-oriented outcome. Publication bias inflated the observed treatment effects.

Network meta-analysis (NWA) is a relatively new and complex method of analysis that allows treatments to be compared both directly and indirectly.  For example, if a number of studies had compared treatments A against B   and B against C   for a certain condition but there had been no direct comparisons of A against C they could be compared using a NMA.  For this particular NMA the authors have use the findings form an earlier meta-analysis conducted for the ADA guideline on nonsurgical treatment of chronic periodontitis.

A key issue with all meta-analysis is the quality of the included primary studies and one of the limitation of the evidence noted in the original guideline was  ‘Most of the included studies were small in terms of the number of participants. Small studies can have a problem with low statistical power. Investigators in several of the included studies tested only onesite per patient per treatment, whereas others provided measures for the entire mouth. They were also concerned about patient drop out, and this together the authors findings of publication bias should also be taken into consideration when assessing the findings of this review.

Overall an additional benefit of about a third of a mm over 6-12 months compared with SRP alone was seen with adjuncts. The review for the ADA guideline found approximately a 0.5-millimeter average improvement in CAL with SRP alone.  The ADA guideline defined a clinical relevance scale for interpreting clinical relevance they considered >0.2-0.4mm a small effect >0.4-0.6mm a moderate effect and >0.6mm a substantial effect.  CAL is considered to be less prone to measurement error than other periodontal outcomes because it is measured from a fixed reference point  scope exists for it to have an impact on the magnitude of the findings. However, measurement error is unlikely to be eliminated so should also be considered in view of the small  clinical changes being reported.