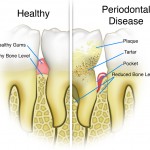 The 2020 update by Tsai duplicated the protocol generated in the earlier network metanalysis of Tu and followed the Preferred Reporting Items for Systematic Reviews and Meta-analysis for Network Meta-analysis (PRISMA-NMA). A systematic search of the electronic databases PubMed, EMBASE, LILACS and CENTRAL (Cochrane Central Register of Controlled Trials) was undertaken. Grey literature was searched for via the website (http://www.greyl it.org/), OpenSIGLE, and Google Scholar. The previous NMA searched the literature up to June 2011, and the update extended that search to the 30th September 2019. There was no language restriction. The risk of bias of the newly added studies was assessed using the Cochrane Collaboration’s tool.

Figure 1.Network geometry for the comparisons among GTR, EMD, their combination therapies, and flap operation in infrabony periodontal lesions 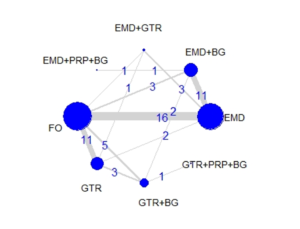 Previously I discussed the problems associated with complexity and combining multiple underpowered small studies in network meta-analysis (Dental Elf – 10th Jan 2022) .There is a further problem with systematic reviews irrespective of whether they use pairwise or network meta-analysis, and that is when the researcher includes data that are too old (Barroso et al., 2006; Patsopoulos and Ioannidis, 2009).

If a research team is going to update a systematic review, as in this case, to guide clinical decision-making, they need to be mindful of not incorporating time-expired research. The researcher must be up to date with current clinical practice guidelines before formulating their research question and setting the inclusion/exclusion criteria for the literature search. If we look at the spread of published papers in this SR, most of the papers were published around 2004 (Range: 1990 to 2017). (Figure 2.)

Figure 2. Number of publications by year 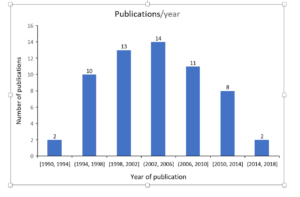 In the case of periodontal regenerative procedures, the first generation of GTR membranes were made from expanded polytetrafluoroethylene (ePTFE). Even though they showed excellent regenerative properties, they also had significant disadvantages. Firstly, they required a second surgical intervention to remove the non-resorbable barrier, but there was also a high risk of membrane exposure and subsequent bacterial contamination and infection (Sculean, 2017; Cucchi et al., 2019). These complications led to the development of resorbable membranes for GTR in the early 2000s, which according to the European Federation of Periodontology S3 Level Clinical Practice Guideline, now represent the gold standard of surgical treatment along with EMDs (Nibali et al., 2020).

Considering that most of the non-resorbable membrane studies are around 20 years old (1995 to 2011), it would be reasonable to perform an additional sensitivity analysis of Tsai’s data excluding these ePTFE studies if we are updating a SR rather than just expanding it. 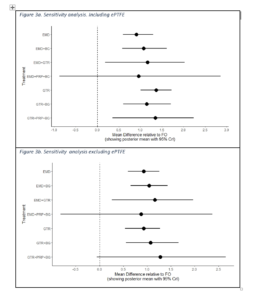 In the new sensitivity meta-analysis, there are two changes in the results regarding reduction in PPD:

Table 2. Comparison of ranking between the original network meta-analysis and the sensitivity meta-analysis (minus ePTFE) for PPD

Following the updated analysis, the clinician could now interpret from these results that the best two options for probing depth reduction would be GTR+BG or EMD+BG, as the highest-ranked result was non-significant. For further information on interpreting and choosing the best treatment in network meta-analysis, I recommend a short paper by Mbuagbaw (Mbuagbaw et al., 2017).