Home » Posts » Dentistry » orthodontics » Malocclusion: review finds that it has an adverse effect on quality of life 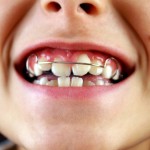 Malocclusion is common and the majority of corrective orthodontic treatment is performed during adolescence. As this is a period during which appearance tends to become more importance it is considered that malocclusion may have a psychological and social impacts on the individual’s quality of life.

The aim of this review was to conduct a systematic review of quantitative studies for evidence regarding the influence of malocclusions on oral health-related quality of life (OHRQOL) in children and adolescents.

Searches were conducted in Medline. Embase. PSYCHinfo, CINHAL, and the Cochrane Library. Studies in health child or adolescent population with non-syndromic problems and no previous orthodontic treatment were considered where self-assessed OHRQOL estimated using validated questionnaire instruments. Three independent reviewers selected studies and Quality of evidence was classified according to GRADE guidelines as high, moderate, or low.

The scientific evidence was considered strong since four studies with high level of quality reported that malocclusions in the aesthetic zone have negative effects on OHRQOL, predominantly in the dimensions of emotional and social wellbeing.