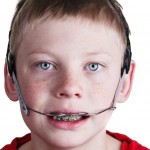 The application of extra-oral traction to the maxilla for the treatment of class II malocclusions has been in use for many years. Headgear has been reported to modify maxillary growth in both the sagittal and the vertical direction while rotation of the palatal plane and changes in the anterior face height have also been reported.

The aim of this review was to assess the effect of orthopaedic treatment of Class II with extraoral traction delivered to the maxilla with headgear appliance and compare it to untreated Class II patients.

Searches were conducted in the Medline, Cochrane Library, Virtual Health Library and IS Web of Knowledge databases supplemented with searches of Scopus, Google Scholar, ClinicalTrials.gov, and ISRCTN registry. No limits on publication date or language were applied. Parallel randomised or prospective non-randomised trials comparing any type of headgear appliance to an untreated control group in human patients were considered.

One review selected studies with independent duplicate checking by the other reviewers. Data was extracted independently by the reviewers with risk of bias being assessed using either The Cochrane risk of bias tool or ACROBAT-NRSI (A Cochrane Risk Of Bias Assessment Tool: for Non-Randomized Studies of Interventions) tool. Random-effects meta-analyses of mean differences (MDs) and relative risks (RRs), and were subgroup and sensitivity analyses were carried out. The overall quality of evidence for each of the main outcomes was rated using the GRADE approach

Based on high quality evidence, headgear treatment is associated with a short-term reduction of the SNA angle, which is independent of confounding effects on the subspinale point and is proportional to the degree of the initial discrepancy in the SNA angle. Therefore, headgear might seem like a viable and effective treatment option for the management of Class II malocclusion with maxillary prognathism. Based on evidence of moderate quality, treatment with headgear might decrease the risk of dental trauma during the subsequent years, so this should be taken into account when planning the Class II treatment of patients in high risk of dental trauma. The effect of headgear on the maxillary rotation, the nasolabial angle, the reduction in PAR scores, and signs of temporomandibular dis- orders could not be robustly assessed, due to limited evidence of low quality.

The review is based on a protocol that was registered a priori, has searched an extensive range of databases and followed a sound methodological approach. Both randomised and non-randomised studies are included and it is interesting to note that elements of the 18 trials are reported in 47 different papers. The quality of the included studies is limited with only 1 of the 5 included RCTs being considered to be at low risk of bias. Given this and the authors highlighting concerns over lack of outcome blinding in almost all of the studies it is perhaps a little surprising that they consider the short-term reduction of the SNA angle to be based on high quality evidence. The finding that early treatment with headgear reduces incisal trauma support the findings of a 2013 Cochrane review by Thiruvenkatachari et al ( Dental Elf -7th Jan 2014).