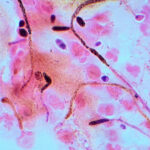 An opportunistic pathogen found in the human oral cavity called Candida albicans can result in both systemic and superficial fungal infections. The most prevalent oral fungal infection and a form of superficial fungal infection is oral candidiasis, which is mostly brought on by C. albicans. Use of antibiotics, glucocorticoids, and immunosuppressants, wearing dentures, immunodeficiency, organ transplantation, and diabetes are some of the factors that contribute to this. Oral candidiasis affects more than 80% of people with the human immunodeficiency virus (HIV), 15% to 71.6% of people who wear dentures, and 32.6% of cancer patients who have undergone radiotherapy and chemotherapy. Malnutrition and immunodeficiency are two major aetiologies of oral candidiasis in children.

The aim of this review was to compare the efficacy and safety of topical antifungal drugs for oral candidiasis in children and adults.

A literature search was carried out independently by two researchers. The Web of Science, Medline, PubMed, Cochrane Library, and WHO International Clinical Trials Registry Platform were among the databases that were searched. Additionally, unpublished grey literature was looked up.

The inclusion criteria were as follows:

Cochrane’s Review Manager was utilised for the statistical evaluation. The results were dichotomous for the primary and secondary outcomes, and the risk ratio (RR) was estimated with a 95% confidence interval (CI) Results with a P value of less than 0.05 were considered statistically significant at test level alpha = 0.05.

11 studies were incorporated in the systematic review. 9 of these studies focused on oral candidiasis in adults, and two looked at oral candidiasis in young children. Studies involving 2014 patients were conducted and published between 1975 and 2017. 4 studies looked at fluconazole, 4 looked at miconazole, 5 at clotrimazole, 3 at amphotericin B, 2 at itraconazole, and 4 at nystatin.

5 studies were deemed a high risk for bias due to inadequate reporting of the randomisation method, and only 3 studies were considered low risk.

The findings were as follows:

Furthermore, there was a comparison of immunosuppressed vs immunocompetent patients.

Firstly, as 3 studies out of the 11 were considered low risk of bias which is a strong limitation of this review. Also, some of the randomised control trials are not well designed due to diversity in terms of the ages of patients, dosages used and duration of courses of treatment resulting in increased heterogeneity. However, before this study, there have none that looked at topical antifungals for treatment of oral candidiasis in infants firstly. The results of the two studies that were compared showed that miconazole had a higher mycological cure rate than nystatin.

Additionally, a previous meta-analysis (Dental Elf 8th Apr 2020) compared the efficacy of various antifungals for treating oral candidiasis which showed that fluconazole had the highest efficacy, which was consistent with our evaluation of the results. However, the previous meta-analysis did not distinguish between systemic and topical administration, or between patients who were adults and children. Therefore, the results of this meta-analysis can be used as a more comprehensive reference.