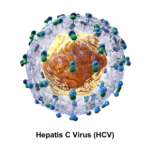 Oral lichen planus (OLP) is a chronic, inflammatory, mucocutaneous disorder associated with cell-mediated immune system dysfunction. It is estimated to affect between 1-2% of the population. A number of clinical forms are described, reticular, papular, plaque-like, erosive, atrophic, and bullous.  Approximately 3% of the global population are infected with hepatitis C virus (HCV), with the lowest rates being seen in the UK and Scandinavia (0.1%) and highest in Egypt (15-20%). Several studies have investigated the association of HCV and OLP in different countries with although some studies suggest a positive association and others a negative association.

The aim of this review was to determine if there is a correlation between oral lichen planus and hepatitis C virus infection.

Searches were conducted in the PubMed, Embase and Cochrane Library databases for studies examining the association between hepatitis C virus (HCV) and oral lichen planus (OLP). Case-controlled studies in English investigating the prevalence of HCV in OLP patients with OLP diagnosis confirmed clinically and histologically; HCV status being confirmed by serological tests for circulating anti-HCV antibodies. The odds ratios (ORs) of seropositivity to HCV in OLP were calculated for each study and associations were measured using random-effect odds ratios (ORs) combined with 95% confidence intervals.

the association of HCV and OLP may necessitate screening patients with OLP to assist in the early diagnosis of HCV infection in a subset of patients, as this liver disease often has a long asymptomatic evolution and remains undiagnosed.

While 3 major databases are searched for this review included studies are restricted to those published in English so relevant studies could have been missed. The authors also highlight potential concerns regarding publication bias and differences in the sources and ratios of controls to cases as potential problems.  Many of the included studies were undertaken in areas with high endemic levels of HCV infection which may also had an effect. So, while the findings suggest a six-fold higher risk for HCV infection in patients with OLP the authors themselves suggest caution in interpretation of the findings.

Some evidence for the presence of hepatitis viruses A, B and C in oral fluids