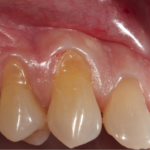 Non-carious cervical lesions have been defined as tooth loss at the cementoenamel junction that is not related to bacteria.  There is debate regarding their aetiology which is considered to be multifactorial involving attrition, abrasion and erosion.  There is also variation in their classification and diagnosis and wide variation in reported prevalence rates.

The main aim of this review is to estimate the worldwide prevalence of non-carious cervical lesions (NCCLs) in the adult population.

The reviewers followed the PRISMA and MOOSE guidelines when undertaking this review, two major databases were searched although the restriction in English language articles may have resulted in the exclusion of some relevant studies. Of the included studies 12 were considered to be at high or substantial risk of bias which needs to be taken into consideration when interpreting the findings. Another issue is the definition and diagnosis of NCCLs as differing definitions may contribute to the variation in reported prevalence between the included studies. This is discussed in the review and one of the recommendations is that a standard index needs to be developed to facilitate comparison of results in the future.