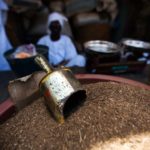 Toombak is a form of smokeless tobacco is widely used by the Sudanese population and many others in the sub-Sahara region but not well known in Western Society.  Sudan has the second highest incidence for oral cancer in the Middle East but while the risks of smokeless tobacco are known the risks of oral leukoplakia and oral squamous cell carcinoma among toombak users are less well explored.

The aim of this review was to explore the association between the use of toombak and oral leukoplakia and oral squamous cell carcinoma (OSCC).

Searches were conducted in the Scopus, Embase, Web of Science, Google Scholar, ProQuest and OpenGrey databases. Clinical trials (randomized controlled trial) and/or observational studies (cross‐sectional, population‐based and case‐control) that assessed the associated risk of developing oral leukoplakia/OSCC among their patients who were using toombak published in English between 1990 to 2018 were considered.  Two reviewers independently selected studies extracted data and assessed risk of bias using the Newcastle‐Ottawa scale (NOS).

In this study, we found a strong causal association between toombak users and oral leukoplakia and/or OSCC. The associated risk is highest among current toombak users compared with non ‐users. The associated risk increases with increased duration of toombak use. Given the strong, epidemiological evidence generated here, further large-scale multi‐centre prospective studies, together along with in‐vivo and in‐vitro studies should provide further insight into the potential role of toombak in oral carcinogenesis.

A broad search strategy has been used to identify papers for this review although given the specific regional use of toombak it is perhaps surprising that only English language papers have been included.  All of the included studies are from the Sudan and several involve the same authors. Most of the studies were hospital based so may not represent the broader population in Sudan.  No meta-analyses have been conducted and the results from individual studies are presented which should be taken into consideration when interpreting the findings. Although the magnitude of the odds ratios do indicated a strong association between toombak use and OSCC.

“Chewing tobacco in Darfur” by UNAMID Photo is licensed under CC BY-NC-ND 2.0