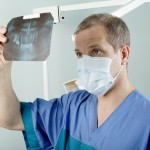 The aim of this study was to investigate whether fixation of fractures of  the mandibular angle  using miniplates placed through a transbuccal approach  resulted in lower infection rates that those placed on the mandibular external oblique ridge using an intra-oral approach.

Patients were randomised (by year of birth) to having their mandibular angle fractures treated with an intraorally placed ridge plate, or a plate placed transbuccally. The same plating equipment was used throughout the study with the surgical technique  standardised as far as possible and all patients were given a standard perioperative and postoperative antibiotic regimen.  The main outcome measure was plate removal because of infection. A range of risk factors were also measured.

transbuccal plating leads to fewer plates being removed for infection than ridge plating in the treatment of angle fractures.

While this is a large trial the use of year of birth a method of randomisation means that this study would be classified as at high risk of bias using the Cochrane Collaboration’s risk of bias assessment tool.  In addition to the main outcome measure a wide range of risk factors considered to plate removal were also reported. However these is no indication as to whether the trial was adequately powered to assess all of those reported.

Last reply was November 25, 2015
Try out our members features!