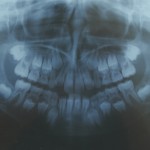 The upper permanent canine normally erupts between 11-12 years of age. However, for between 1-3% of children this does not occur and in 50% of the cases it is due to the tooth being displaced palatally. Two surgical approaches are used to allow orthodontic alignment. An open procedure  where  a palatal flap is raised ,overlying bone and mucosa removed and a pack placed.  In the closed technique bone is removed an orthodontic attachment bonded to the tooth allowing alignment of the tooth from below the mucosa.  In a Cochrane review in 2008 (Parkin et al) found no evidence to support the use of 1 technique over the other.  The aim of this study was to determine if there were any differences in the outcomes between the open and closed surgical techniques for exposing a palatally displaced maxillary canine (PDC).

Patients age 20 years or younger with unilateral palatally ectopic maxillary canines requiring surgical exposure and orthodontic alignment and minimal orthodontic problems other than the ectopic canine were included. They were randomised to receive either open or the closed surgical procedure carried out under general anaesthesia by  specialist oral surgeons or oral and maxillofacial surgeons. The outcomes were time spent in the operating room and 10-day postoperative patient questionnaire findings.

There were no differences in the surgical outcomes investigated in this study between open and closed exposure for palatally displaced maxillary canines.

Last reply was August 25, 2017
Try out our members features!