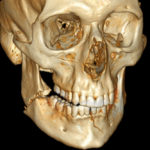 Fractured mandibles account for between 36-54% of all maxillofacial trauma with the mandibular angle accounting for about 40% of these. A number of reviews have suggested that the presence of a third molar increases the risk of fracture. There is a debate as to whether impacted or partially erupted third molars in the fracture line should be removed.

The aim of this review was to verify whether the presence of the lower third molar in the mandibular angle fracture line is associated with postoperative complications.

Searches were conducted in the PubMed, Scopus, Web of Science, Cochrane Library, and Virtual Health Library databases.  Observational studies (cross-sectional, prospective and retrospective cohort, and case–control studies) and/or clinical trials involving 10 or more cases evaluating between the presence of lower third molar in the fracture line of unilateral or bilateral mandibular angle fractures and possible postoperative complications were considered.  Three reviewers independently selected studies extracted data and assessed risk of bias. The Cochrane risk of bias tool was used for clinical trials and the Newcastle-Ottawa scale for observational studies.  The certainty of evidence was rated using the Grading of Recommendations Assessment, Development and Evaluation (GRADE) approach.

the findings suggest that the absence of the third molar in the mandibular angle fracture line, when it is missing preoperatively or removed during fracture treatment is associated with a lower rate of postoperative infection when compared to those angle fractures with a third molar present.

The authors have searched a number of major databases including a broad range of study designs. Only 3 trials were included and two of those were considered to be at high risk of bias for randomisation and allocation concealment. The included cohort studies also scored poorly in relation to outcome assessment and adequacy of follow up. Consequently, the GRADE assessment was that the studies were of low and very low quality.  The limited quality of the included studies should be considered carefully when interpreting the findings.  All but one of the analyses conducted suggested no statistically significant differences between retaining or removing third molars. Because of the limited quality of the included studies high quality well-reported prospective studies of appropriate size are needed to provide better quality evidence on this question.

Third molars and mandibular angle fractures: Are they associated?