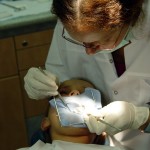 During root canal therapy (RoCT) cleaning and shaping of the canals using irrigant solutions is considered to play an important role in successful treatment. Sodium hypochlorite (NaOCl) is the most widely used irrigant although chlorhexidine gluconate (CHX), which has good antiseptic properties, is a promising alternative.

Searches were conducted in the Medline, Web of Knowledge, SCOPUS, and Science Direct databases. Clinical trials and randomized controlled trials published in English and comparing CHX and NaOCl as irrigant agents during root canal treatment were considered. Two reviewers carried out study selection and data abstractions independently. Study quality was assessed using items from the CONSORT statement. Owing to the heterogeneity of the laboratory methods used meta-analysis was not conducted.

The available evidence on this topic is scarce, and the findings of studies were not consistent. Additional randomised clinical trials using clinical outcomes to compare the use of sodium hypochlorite and chlorhexidine during root canal therapy are needed.

This review set out to compare the efficacy of two root canal irrigants used during RoCT. A 2012 Cochrane review by Fedorowicz et al (Dental Elf – 13th Sept 2012 ) has previously looked at this topic. They included 11 RCTs, four of which compared NaOCL and CHX. This new review also includes 4 RCTs only 2 of which were included in the 2012 Cochrane review. The Cochrane review concluded:-

Although root canal irrigants such as sodium hypochlorite and chlorhexidine appear to be effective at reducing bacterial cultures when compared to saline, most of the studies included in this review failed to adequately report these clinically important and potentially patient-relevant outcomes. There is currently insufficient reliable evidence showing the superiority of any one individual irrigant. The strength and reliability of the supporting evidence was variable and clinicians should be aware that changes in bacterial counts or pain in the early postoperative period may not be accurate indicators of long-term success. Future trials should report both clinician-relevant and patient-preferred outcomes at clearly defined perioperative, as well as long-term, time points.

This new review has not identified any RCTs published since 2012 so there is currently no evidence to suggest whether NaOCl or CHX should be the irrigant agent of choice during endodontic therapy.

Last reply was March 7, 2018
Try out our members features!