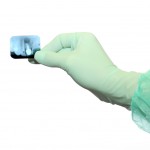 A range of materials have been used for root-end filling after endodontic surgery with a systematic review by Tang and Yin in 2010 finding that;

‘mineral trioxide aggregate (MTA) as root-end filling is better than amalgam and purely gutta-percha but similar to intermediate restorative material(IRM).’

However, only a 5 trials could be included in that review. The aim of this trial was to evaluate the clinical outcomes of endodontic microsurgery when Super EBA (Super Ethoxy–Benzoic Acid) and MTA were used as the root-end filling materials.

260 Patients (260 teeth) requiring endodontic microsurgery were randomly assigned to either the Super EBA group or the MTA group (130 teeth per group)using the minimization method. A procedures were conducted by a single operator according to a standard protocol. The patients were followed up at 3, 6, and 12 months to assess clinical and radiographic signs of healing. Radiographs were assessed blindly by two independent examiners. the outcomes were; complete healing; incomplete healing (scar tissue); uncertain healing and unsatisfactory healing. The primary outcome measure was the change in the apical bone density at 12 months, and the secondary outcome measures were the presence of clinical symptoms or abnormal findings at 12 months.

in this prospective randomized controlled study, there was no significant difference in the clinical outcomes of endodontic microsurgery when Super EBA and MTA were used as root-end filling materials.

The outcomes of this trial have been assessed at 12 months and the issue of whether this is sufficiently long to assess outcomes is briefly raised in the discussion. Also, given the categorise of healing that are used in these types of study, which are open to interpretation, greater consideration could be given to including patient reported outcomes.

Last reply was January 9, 2017
Try out our members features!