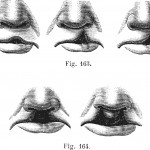 Oral Clefts are common birth defects with incidence ranging from 1-2.2 per 1000 births in different parts of the world. Oral clefts can be divided into cleft lip with or without cleft palate (CL± P) and cleft palate only (CP), according to differences in anatomy, genetics, and embryology. They can be further classified as; isolated-clefts that occur alone or with secondary or minor defects; multiple, clefts with other major defects not recognized as syndromes; syndromes-clefts with other major defects that are recognized as syndromes.

The aim of this review was to assess the association between maternal active smoking during pregnancy, especially in the first trimester, and the incidence of cleft lip and palate in their offspring.

Searches were conducted in the Cochrane, PubMed, and Ovid Medline databases. Case-control and cohort studies with records of maternal active smoking (includinglevels of exposure) before and after conception, especially the peri-conception period were considered. Reviewers defined the peri-conception period as the period from 3 months before conception to the first trimester of pregnancy. Odds ratio (OR) and associated 95% confidence interval (CI) were calculated from raw data from each study.Random effects meta-analysis were conducted for total clefts, CL  ± P, and CP, as well as isolated CL±  P and CP, if available. Total cleft cases were only analyzed when CL ± P and CP were not distinguished.

There is a moderate risk for having a child with a CL ± P or CP in women who smoke during pregnancy. We could not confirm whether there was a positive dose-response effect between maternal smoking and clefts.

Three major databases were searched but it was not clear if the search was limited in respect of publication date or language.  No details were provided regarding how study selection and data abstraction was carried out. There was also no formal assessment of study quality.  Smoking ‘dose ‘ classification varied in the study so it would have been helpful to understand how this was assessed in the original studies and whether there were specific inclusion criteria in relation to this as there is likely to be an impact of reporting bias as noted in the authors discussion.  A earlier review by Sabbagh et al (Dental Elf – 24th Mar 2015) also suggested a link between maternal passive smoking and non-syndromic orofacial clefts.

Last reply was November 16, 2016
Try out our members features!