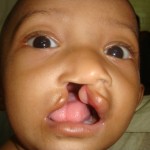 Cleft lip and palate (CLP) is a common birth defect with a global prevalence of between 1 in 5-700 live births.   CLP can cause problems with feeding, speech, hearing as psychosocial issues. Treatment is prolonged and orthognathic surgery is frequently performed to correct maxillary hypoplasia. Distraction osteogenesis, which achieves bone lengthening by gradual mechanical distraction, was first used in orthognathic surgery in the 1990s and is an alternative intervention.

The aim of this review was to provide evidence regarding the effects and long-term results of maxillary distraction osteogenesis compared to orthognathic surgery for the treatment of hypoplastic maxilla in people with cleft lip and palate.

This review found only one small randomised controlled trial concerning the effectiveness of distraction osteogenesis compared to conventional orthognathic surgery. The available evidence is of very low quality, which indicates that further research is likely to change the estimate of the effect. Based on measured outcomes, distraction osteogenesis may produce more satisfactory results; however, further prospective research comprising assessment of a larger sample size with participants with different facial characteristics is required to confirm possible true differences between interventions.

As the authors note maxillary distraction osteogenesis is a new and emerging technology for the treatment of cleft lip and palate. This well conducted review only identifies a single trial with a small number of participants and while it suggests that the new technique may be more stable five years following surgery the quality of evidence is very low. Well conducted, and reported high quality trials are needed to confirm potential benefits.