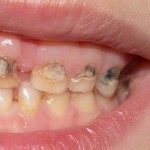 Early childhood caries (ECC) is a common and significant public health problem and is rapidly increasing in low- and middle-income countries. Iron deficiency anaemia is also a common and widespread nutritional deficiency with a high prevalence in pre-school children. Pain and discomfort from carious teeth may impact on nutritional impact and some studies have suggested a link between caries and iron deficiency anaemia (IDA).

The aim of this review was to assess if there is an association between early childhood caries and iron deficiency anaemia.

This systematic review demonstrates an association between ECC and increased odds of IDA rather than it being the cause for IDA. Further longitudinal studies with robust methodology are required to determine an evidence-based association.

The authors have searched a wide range of databases although inclusions were restricted to publications in English since 1998 which may have excluded some relevant studies. Only 14 studies were included and the majority of these were of a cross-sectional design and none of the included studies were at low risk of bias. Few of the included studies considered potential confounding factors such as socio-economic status or dietary factors and reference values for blood parameters showed high heterogeneity. So, while the findings suggest an association between ECC and iron deficiency the certainty of the evidence was assessed a being very low consequently the findings of this review should be considered very cautiously.