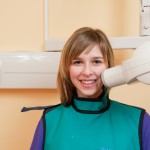 If diagnosed early the caries process can be stabilised or reversed, so detection and diagnosis in this early state is important. This early carious state is not often reported in dental epidemiology so the challenge needed to manage caries may be underestimated.  In recent decades the traditional dental imaging method of analogue bitewing radiography has been largely replaced with digital imaging and cone beam computed tomography (CBCT) has also been introduced.

The aim of this review was to determine the diagnostic accuracy of different dental imaging methods to inform the detection and diagnosis of non-cavitated enamel only coronal dental caries.

The design and conduct of studies to determine the diagnostic accuracy of methods to detect and diagnose caries in situ are particularly challenging. Low-certainty evidence suggests that imaging for the detection or diagnosis of early caries may have poor sensitivity but acceptable specificity, resulting in a relatively high number of false-negative results with the potential for early disease to progress. If left untreated, the opportunity to provide professional or self-care practices to arrest or reverse early caries lesions will be missed. The specificity of lesion detection is however relatively high, and one could argue that initiation of non-invasive management (such as the use of topical fluoride), is probably of low risk.

CBCT showed superior sensitivity to analogue or digital radiographs but has very limited applicability to the general dental practitioner. However, given the high-radiation dose, and potential for caries-like artefacts from existing restorations, its use cannot be justified in routine caries detection. Nonetheless, if early incidental carious lesions are detected in CBCT scans taken for other purposes, these should be reported. CBCT has the potential to be used as a reference standard in diagnostic studies of this type.

Despite the robust methodology applied in this comprehensive review, the results should be interpreted with some caution due to shortcomings in the design and execution of many of the included studies. Future research should evaluate the comparative accuracy of different methods, be undertaken in a clinical setting, and focus on minimising bias arising from the use of imperfect reference standards in clinical studies.

We have previously looked at reviews of caries detection (Dental Elf – 10th Jun 2015; Dental Elf – 13th Feb 2013). This new detailed diagnostic test accuracy review of fluorescence-based devices and has been undertaken following standard Cochrane Diagnostic Test Accuracy (DTA) and is one of a suite of reviews using the same generic protocol. This review focuses on the ability of analogue and digital radiographs, and cone beam computed tomography (CBCT) to detect early or enamel caries to support caries management strategies. While CBCT is included and shows promise in detecting early carious lesions the high levels of radiation make this difficult to justify in a typical clinical setting. In addition, the review suggests that analogue and digital radiographs do not have sufficient sensitivity to detect and inform the diagnosis of early caries for clinicians