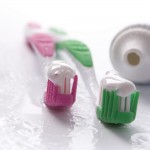 Despite continuing improvements in dental health considerable inequalities remain with highest levels of disease amongst children living in the most materially disadvantaged areas.

The main aim this study was to assess the caries-preventive efficacy of  a 2 years  twice weekly supervised brushingprogramme using a self-applied gel containing 12,500 ppm fluoride on schooldays compared with weekly supervised use in children at high caries risk (with prior caries experience on first permanent molars).   A second aim was to assess efficacy compared with similar children who continued with their usual oral hygiene care.

Some caution is needed as greatest benefit was shown by compliant children, and recommended that where schools are co-operative, high fluoride gel be used twice a week within a school-based programme over a 2-year period.