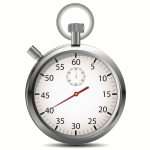 Concerns about levels of engagement in meaningful activity by people with learning disabilities have been explored through studies using a method known as momentary time sampling, an interval recording method, where an observer  observes whether a particular behaviour is occurring or not during a specified time period. However, the majority of such studies have taken place over relatively short periods of time, for example an observation session of 30 minutes, broken down into 30 intervals where the observation is made at the end of each minute. Much of this work has been done in afternoon sessions and the authors of this study raised the question as to whether an approach which covered the whole day would yield any difference in results? The researchers gathered data for 18 individuals using a 20 second  momentary time-sample from 08:00 to 19:00 over a number of days. They compared the duration of behaviours when estimated from a 2-hour period between 16:00 and 18:00, the period 08:00–16:00 and 18:00–19:00. They found no significant differences for engagement in meaningful activity, two-way interaction or 24 of the 26 behaviour codes used. Longer duration was found for personal care during the period 16:00–18:00 which included time for eating and for neutral staff contact in institutions only. They found no differences for any code in housing. They concluded that based on their findings, observation of activity over the period before and during the evening meal by momentary time-sampling could be used to estimate overall levels of engagement in meaningful activity, two-way interaction and total staff contact. The only exception to this was observation of personal time and neutral contact from staff in institutional settings. As this was a single study of only eighteen individuals, the authors suggest a need for further studies to confirm their results.

Estimating Activity Duration by Momentary Time-Sampling of Part or All of the Day, Mansell J & Beadle Brown J, in Journal of Applied Research in Intellectual Disabilities, 24: 489–494