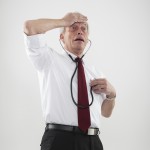 Most of us care about our health (something we elves encourage) but for up to 5% of people, worrying about health has become a significant problem in itself. Severe health anxiety, or hypochondriasis, is said to exist when someone holds a strong fear of having a serious disease, despite all medical assurances to the contrary.

Given the increasing evidence base for MBCT as an effective treatment for depression, anxiety and stress (as blogged by The Mental Elf) it makes sense to consider its potential use for health anxiety.

In a study published in the Journal of Consulting and Clinical Psychology last year, researchers from the University of Oxford found preliminary support for the use of MBCT as a psychological approach alongside the usual package of care.

The study looked at 68 participants whose health anxiety was measured prior to intervention, immediately following intervention and at a 1-year-follow-up.

All participants had to meet DSM-IV-TR criteria for health anxiety as their primary diagnosis. Sixty-five per cent were self-referred and 35% were referred by a health professional. The majority were female (78%) and white (97%).

A composite of three measures was used to assess levels of health anxiety: two standardised self-report measures for health anxiety, and a treatment-blind independent assessor rating. Changes in mindfulness was also measured, as were depression and anxiety levels. Not quite what group MBCT in the NHS looks like, but you get the idea…

…this trial provides reason for optimism that the effects of MBCT are mediated by change in the mechanisms hypothesized to underlie it and that MBCT has potential as an adjunctive class-based psychological approach to treating severe health anxiety. An approximate demographic overview of the participant sample

Despite these limitations, the positive findings should be taken as preliminary clinical support that mindfulness-based therapies show promise as a treatment for health anxiety, and that further research resolving the above limitations is well worthwhile.

As something of an aside, the finding that depression and anxiety scores did not significantly differ between groups was also really interesting, given previous research (Hofmann et al, 2010 for review). Although this could have been a result of lower power to detect differences in these symptoms compared with health anxiety, it certainly raises an interesting question about the scope of tailoring mindfulness programmes to specific conditions, and whether this will be to the detriment of wider benefits to mental health.

Hofmann S, Sawyer A, Witt A and Oh, T. The effect of mindfulness-based therapy on anxiety and depression: A meta-analytic review. Journal of Consulting and Clinical Psychology, 2010, 78: 169-183