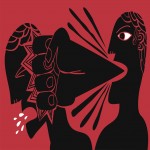 The public perception of mental health and violent behaviour has often been influenced by poor media coverage and a focus on specific crimes committed by people with psychosis. There’s a nice summary of work in this area on the Mind website, which includes a number of enlightening stats, including this one:

The fear of random unprovoked attacks on strangers by people with mental health problems is unjustified. This has been highlighted by a US finding that patients with psychosis who are living in the community are 14 times more likely to be the victims of a violent crime than to be arrested for such a crime.

Of course, interpersonal violence does sometimes occur in mental health and criminal justice populations. This new health technology appraisal conducted by researchers from the University of Liverpool set out to examine the effectiveness of pharmacological, psychosocial and organisational interventions that have been developed to help prevent and manage violent behaviour.

The authors conducted a systematic search to identify studies that looked at interventions aimed at reducing violence against other people. Participants in the studies had to be aged ≥ 17 years and either have a mental disorder, be offenders or have committed indictable offences. Studies also had to report an outcome measure of violence either directly (e.g. reconviction for a violent offence) or indirectly through a proxy measure (e.g. a validated anger measure).

They found 198 studies, including 51 randomised controlled trials. The literature was extremely diverse and covered 94 different types of intervention and 55 different outcomes. This heterogeneity made it very difficult to conduct a robust meta-analysis and pool the results.

However, three interventions were highlighted as effective in the results:

Whilst some interventions targeted at mental health populations to reduce violence are well supported by the evidence a scattergun approach in the research literature provides little firm evidence for the majority of interventions.

The report also made the following recommendations for future research: