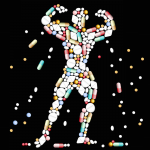 Antipsychotic medication is the first port of call when treating schizophrenia, and patients are often maintained on these drugs for many years due to the chronic nature of the illness. The term ‘antipsychotic’ is a bit of a misnomer, however. In medical parlance, these drugs are more commonly known as dopamine antagonists. This is because the principal mechanism of all antipsychotics is to block certain types of dopamine receptors across the brain.

The dopamine hypothesis of schizophrenia states that excess release of dopamine in the mesolimbic pathway of the brain gives rise to the ‘positive’ symptoms of schizophrenia such as hallucinations and delusions (Carlsson & Lindqvist, 1963). By blocking said receptors, a reduction in symptoms should ensue.

While this is not the only prominent hypothesis of schizophrenia, it is the most well established, with a recent landmark genetics study lending it weight by finding a variant in a dopamine receptor gene to be common in schizophrenia. Nonetheless, putting aside the potential efficacy of antipsychotics as a whole, what about the relative efficacy of one antipsychotic over another?

It is important to know that antipsychotics are split into different groups: Newer antipsychotics are not necessarily superior to older drugs.

Each first-generation antipsychotic is classified according to its potency, with low-potency antipsychotics requiring higher doses to achieve the same effect as high-potency ones, but with different side effects (Rijcken et al., 2003). Interestingly, the potency of an antipsychotic may not be related to its efficacy, as is often perceived by clinicians. Currently, there is little evidence to indicate as much, meaning that treatment guidelines (at least in Europe) recommend typical antipsychotics equivalently regardless of potency (Gaebel et al., 2006). It’s important to dispel the myth that high-potency antipsychotics are more effective than low-potency drugs.

Each paper evaluated the efficacy of a high-potency first generation antipsychotic (Trifluoperazine, Fluphenazine, and Haloperidol, respectively) against all low-potency antipsychotics. All three reviews searched available literature in the Cochrane Schizophrenia Group’s comprehensive Trials Register, selecting for randomised controlled trials (RCTs) regardless of duration.

The principal outcome measure was clinical response as reported in each study, with the following secondary outcome measures: symptoms of schizophrenia, change in global state, leaving the study due to inefficacy or side effects, relapse rates, rehospitalisation, side effects, death, quality of life, and satisfaction with care.

Two of the authors extracted and examined the data independently. For continuous data, mean differences (MD) between groups were estimated. For categorical (e.g. yes/no) data, risk ratios (RR) and their 95% confidence intervals (CI) were calculated, based on a random-effects model (i.e. a way of accounting for unobserved randomness). The trials included in these 3 reviews were generally of low to medium quality.

Here are the highlights of the findings from the three reviews:

For people with schizophrenia it is important to know that there is low/moderate quality evidence that Trifluoperazine/Haloperidol/Fluphenazine and low-potency antipsychotics are approximately equal in their effects on treatment response, and that there is evidence of a lower quality that they clearly differ in side-effects (such as movement disorders). They might tell their doctors that they want to be involved in the choice of the antipsychotic that is best for them.

In terms of efficacy, little difference was found between the high-potency and low-potency antipsychotics.

This reinforces the view, echoed by the authors, that patients should be involved in the choice of prescribed antipsychotic. If efficacy is more or less equivalent from one antipsychotic to another, then it would surely come down to which side effects were the most tolerable, or presented a greater health-risk to the individual.

It is worth noting that both the quality of how the trials were reported and the data they gathered was mostly of low and/or medium quality. The only high-quality finding was from one RCT of Fluphenazine against low-potency antipsychotics, showing that the latter were significantly more responsible for sedation.

With the current evidence being limited in terms of quality, it is difficult to draw firm conclusions about the relative efficacy of high vs low-potency first generation antipsychotics. Nonetheless, what evidence is available points to a lack of a difference in efficacy, but clear differences in adverse side effects, making it crucial that patients be involved in deciding which antipsychotic is right for them, as the authors make clear in their conclusions.

Speaking more broadly, mental healthcare is perhaps unique within medicine, with regards to the impact that patient involvement can have on outcomes, such as treatment adherence (Thompson & McCabe, 2012). It is dispiriting to learn from recent reviews that shared decision-making in the treatment of schizophrenia occurs less often than in general practice, despite both patients and clinicians acknowledging its desirability (Beitinger et al., 2014). Shared decision-making in the treatment of schizophrenia occurs less often than in general practice.

Carlsson, A., & Lindqvist, M. (1963). Effect of chlorpromazine or haloperidol on formation of 3‐methoxytyramine and normetanephrine in mouse brain. Acta pharmacologica et toxicologica, 20(2), 140-144. [Abstract]