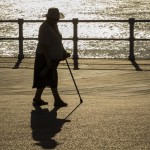 Over the last thirty years there has been increasing policy emphasis on care in community-based settings for those with dependency needs. This, coupled with the long-term shift towards an ageing population and the improved longevity of those with life-long disabilities, has had significant implications for family carers.

In the United Kingdom there are currently 6.5 million carers; this figure is estimated to rise by 3.4 million by 2045 Whilst carers report that caring brings some benefits (such a sense of giving back and higher levels of subjective well-being), it is now widely recognised that caring impacts negatively on carers’ health and wellbeing, quality of life, income and capacity to remain in work (Carers UK 2014, Larkin & Milne 2013).

One of the less well-recognised consequences of the increase in the number of carers is that there are more ‘former carers’. These are carers who have ceased ‘caring’ because the family member for whom they cared has entered residential care or died. Despite the fact that 2 million people each year are currently in this situation (life post-caring is still relatively under researched and former carers receive little attention in policy and practice.

The lack of knowledge about former carers is highlighted by Cronin et al in their paper entitled ‘Between Worlds: The experiences and needs of former family carers’. This paper has been published online and will appear in a Health and Social Care in the Community Special Issue on carers in January 2015. Cronin et al conducted a qualitative study of the experiences and needs of Irish former family carers in the post-caring period. A total of 40 family carers took part; 14 in a focus group discussion and 26 in one-to-one, semi-structured interviews.

The study builds on and develops previous research about the impact of caring cessation on carers’ lives, namely that there are a number of threats to former carers’ health and well-being, with financial problems and social isolation being particular issues.

The authors conceptualise the post-caring trajectory as a time of being ‘between worlds’ comprising three interrelated transitions:

This supports earlier conceptualisations of a post-caring trajectory. The authors recommend further research into the ‘legacies of caring’ and the need for targeted support that is sensitive to the different experiences of former carers and to the specific phases of the post-caring experience.

There’s need for support at the different phases of the post-caring experience.

The paper demonstrates an excellent grasp of the existing literature and research methods used are eminently suitable. However, the study suffers from the same weaknesses as other studies of former carers in that it is relatively small–scale, the sample does not reflect the diversity of the caring population and it is limited geographically. These weaknesses in part reflect the lack of funding available for research into post-caring life. This means that although studies are slowly building knowledge about the post-caring experience, individually they lack generalisability.

Although the areas for further research identified by Cronin et al are well-grounded in their findings, the reasons for such research can also be linked to broader issues beyond the paper’s immediate remit. These are:

Consequently, there are going to be more carers, more is going to be expected of carers and more people will become former carers. In turn, more people are likely to experience the adverse effects of caring both during caring and in their post-caring lives. This in itself warrants attention through policy and practice but its significance is compounded by the fact that many of those suffering the effects of caring will go on to care again with reduced capacity to do so. People are likely to experience the adverse effects of caring both during caring and in their post-caring lives.

It is predicted that there will be a shortfall between the ‘demand’ for and ‘supply’ of carers in 2017 leading, to what many refer to as a ‘crisis in care’ (Pickard 2013). Arguably, health and social care is unsustainable without carers. Furthermore, the economic value of family care in the UK was estimated in 2010 to be £119 billion a year – that the annual cost to the National Health Service (NHS) in 2009–10 was £98.8 billion is a useful comparative figure (Larkin & Milne, 2014). For reasons such as these, we are going to need ‘all the carers we can get’, particularly in an era of public sector austerity measures.

Therefore it is imperative that we not only continue to develop policy and practice to address the negative impacts of caring on carers, but also develop interventions to improve carers’ lives post-caring, not least because of the likelihood that they will be needed to undertake some form of caring again to meet the growing demand for care.

Whilst there is a clear economic rationale for the proposed additional dimension to future policy and practice around carers, the moral rationale in relation to carers rights and social justice is equally important. Both elements of the rationale call for achievable solutions. The role of carer-related research in helping ‘to ensure that caring is prioritised as a significant issue for social policy and practice’ (Barnes, 2006 p1) has been acknowledged across a range of platforms.

Cronin et al’s paper is timely in that it directly raises the profile of former carers and indirectly raises questions about how post-caring life is being researched. As this blog has shown, the outcomes of demographic and policy changes lead to a compelling case for an increased emphasis on former carers. Given the value of research in informing the development of policy and practice, the time has now come to reconsider the nature of, and funding made available for, research into life post-caring.