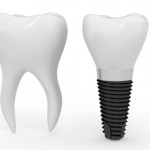 Endosseous root form dental implants have been available since the 1960s while dental Small-Diameter Implants were first introduced commercially in the dental field in 1990. The aim of this study was to determine, the survival of narrow diameter implants, whether survival is dependent on whether these implants are placed using a flap or flapless approach, and whether there is a relationship between length and implant survival in SDIs.

Searches of  Medline, Embase, and  the Cochrane Database of Systematic Reviews were carried out for randomized clinical trials, or retrospective or prospective cohort design with human subjects involving implants with 3.5 mm diameter or less. They were included if they provided a follow up duration of at least 5 months following implant placement and included data on the survival rate of the implants. Data extraction was performed independently for each eligible study by at least two reviewers. Due to the heterogeneity of the studies,  a qualitative summary was  presented no statistical analysis was performed

Survival rates reported for SDI are similar to those reported for standard width implants. These survival rates did not appear to differ between studies that used flapless and flap reflection techniques. The failure rate appeared to be higher in shorter SDIs than in longer ones in the studies in which the length of the failed implants was reported. SDIs could be considered for use with fixed restorations and mandibular overdentures, since their success rate appears to be comparable to that of regular diameter implants. They might also be an efficient, low-cost solution for elders who wish to reduce problems with denture instability.

Only 3 randomised controlled trials were included in this review and the qualitative summary includes studies of different design and no quality assessment. Consequently there  may be issues of selection bias in both the prospective and retrospective designs that need to be taken into consideration when assessing the overall outcomes. Also as patients have received multiple implants they may be an impact  from clustering which is not often considered within the statistical analysis of these type of studies.

There is a Cochrane review that relates to this topic area  by Esposito et al  laste updated in 2007.

Based on the available results of RCTs, there is limited evidence showing that implants with relatively smooth (turned) surfaces are less prone to lose bone due to chronic infection (perimplantitis) than implants with rougher surfaces. On the other hand, there is no evidence showing that any particular type of dental implant has superior long-term success. These findings are based on a few RCTs, often at high risk of bias, with few participants and relatively short follow-up periods. More RCTs should be conducted, with follow up of at least 5 years including a sufficient number of patients to detect a true difference. Such trials should be reported according to the CONSORT recommendations (www.consort-statement.org/).