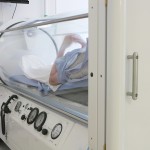 Bisphosphonate-related osteonecrosis of the jaw (BONJ) is a recently recognised condition with reports  surfacing in  2003.  BONJ defined as exposed, necrotic bone in the maxilla or mandible that has persisted for more than eight weeks in patients taking bisphosphonates and where there has been no history of radiation therapy to the jaw.   It has been  estimated that BONJ occurs in roughly 20% of patients taking intravenous zoledronic acid for cancer therapy and in between 0-0.04% of patients taking orally administered bisphosphonates (Cartsos 2008).   The aim of this study was to see whether hyperbaric oxygen (HBO) as an adjunct to surgery and antibiotics in the treatment of bisphosphonate-related osteonecrosis of the jaw (BONJ) improved  on gingival healing, pain, and quality of life.

Patients were randomised to receive 40 HBO treatments at 2.0 atm for 2 hours twice per day or to continue their standard oral care of antiseptic rinses, surgery, and antibiotics as needed. All participants  were followed up  at  3, 6, 12, and 18 months, and all subjects had 24 months of weekly status checks by telephone or e-mail from the study coordinator to record pain levels and changes in overall medical condition. The primary outcome variables were change from  baseline in oral lesion size and number.Pain and quality of life ( QOL ) were secondary outcomes.

What did they find.

27 patients were randomised to standard care and 22 to HBO. 5 patients crossed over to HBO(2 immediately following randomisation) and I patient allocated to HBO group declined HBO. Patients were analysed according to treatment received.

BONJ is multifactorial and no single treatment modality is likely to reverse it; however, it is treatable and even advanced presentations can improve with intensive multimodal therapy. Clinically,HBO appears to be a useful adjunct to BONJ treatment, particularly for more severe cases, although this study was underpowered to fully support this claim.

While this study did show better outcomes in those patients treated with HBO the results need to be interpreted with caution for, as the authors point out the analysis has been conducted based on the treatment received rather than an intention to treat approach. Using this approach undermines the randomisation process.  The authors also noted the study was likely to be underpowered as  the ‘cure rate’ they used to calculate the number of patients needed in the study to show a difference was higher than that seen in the actually study.  It would appear that the outcome evaluations were not conducted by a clinician masked to the interventions and so there is a potential for observer bias. While it was difficult to blind the patients and clinicians involved in the direct care of the patients outcome assessment could have been conducted by another clinician not directly involved.

It is worth noting that a recent Cochrane review looking at hyperbaric oxygen therapy for late radiation tissue injury (Bennett 2012) while calling for further research noted that the application of HBO to selected patients and tissues may be justified.

Guidance on the Oral Health Management of  patients taking bisphosphonates is available from the Scottish Dental Clinical Effectiveness Programme.

Freiberger JJ, Padilla-Burgos R, McGraw T, Suliman HB, Kraft KH, Stolp BW, Moon RE, Piantadosi CA. What is the role of hyperbaric oxygen in the management of bisphosphonate-related osteonecrosis of the jaw: a randomized controlled trial of hyperbaric oxygen as an adjunct to surgery and antibiotics. J Oral Maxillofac Surg. 2012 Jul;70(7):1573-83. PubMed PMID: 22698292.