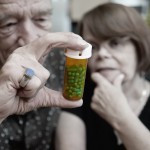 Depression is common in patients with dementia and antidepressants are widely prescribed for this population although the evidence remains limited.

This randomised controlled trial conducted by researchers at the Institute of Psychiatry in London and published in the Lancet, explored the safety and efficacy of two widely-used drugs (sertraline and mirtazapine) in patients with dementia and depression.

Participants were old people with probable or possible Alzheimer’s disease and depression assessed as a score of 8 or more on the Cornell scale for depression in dementia (CSDD). They were randomised to one of three treatment arms:

The primary outcome was a reduction in depression according to CSDD score at 13 weeks, with follow-up to 39 weeks.

There were 326 patients randomised and assessed, 107 to sertraline, 108 to mirtazapine, and 111 to control.

The results showed that the antidepressants were no better than each other or placebo:

Side effects were more common in the groups that were taking the antidepressants:

Because of the absence of benefit compared with placebo and increased risk of adverse events, the present practice of use of these antidepressants, with usual care, for first-line treatment of depression in Alzheimer’s disease should be reconsidered.