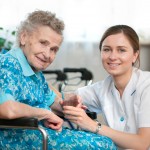 With an increasing proportion of the population living longer and retaining their teeth into old age ensuring that they are maintained in good oral health is important. However,the literature indicates that the oral health of older people in care homes is poor.  The aim of this study was to assess the effectiveness of an Oral health care Guideline for Older people in Long-term care Institutions (OGOLI) in The Netherlands.  The key elements of OGOLI are; integrated oral health care, continuous education of nurses and nurse assistants, and continuous monitoring of structure, process and effect indicators.

This was a cluster randomised controlled trial (RCT) where 12 care homes in the Netherlands with between 120–250 somatically as well as cognitively impaired residents were allocated randomly to an intervention or control group. The intervention consisted of a supervised implementation of the OGOLI and a daily oral health care protocol derived from the OGOLI. The same products and materials were provided to the intervention group. The control group residents received oral health care products as determined by the management of the care home.  The primary outcome variables were the dental and denture plaque scores.