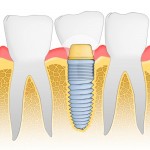 The aim of this study was to see whether the provision of simple mandibular implant overdentures (IODs) to elderly individuals would give them a significantly better nutritional profile than those who receive complete dentures (CDs).

The outcome measure were blood plasma levels of homocysteine (tHcy), vitamin B12, vitamin B6, albumin, serum folate, and C-reactive protein concentrations and  dietary intake were recorded at six-month and one-year post-treatment ,

This study suggests that implant overdentures do not have a more positive effect on the nutritional state of elderly edentate individuals at 6 and 12 months post-treatment than new complete dentures. However, those wearing IODs are significantly more likely to take in their nutrients through fresh, whole fruits and vegetables.