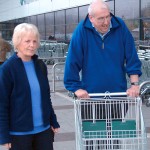 They carried out a series of semi-structured interviews with 16 professional direct-care support staff focusing on their perceptions of ageing among older adults with learning disabilities. They asked what active ageing might mean for such individuals, asking them to think about people they currently supported as well as project forward to think about older people with learning disabilities supported in the future.

They analysed the data using a framework developed from the six core World Health Organization active ageing outcomes for people with learning disabilities.

What they found was that the professionals they interviewed were focused encouraging active ageing among their clients. They did find however, that active ageing principles might need to be applied in ways that considered and responded to individual and diverse needs. The staff interviewed were particularly concerned to deal sensitively and actively with people moving from day services, employment or voluntary work to reduced activity, and finally to facilities to support older people.

They conclude that direct-care staff of older adults with learning disabilities will have a key role in encouraging and facilitating active ageing, and also informing the development of policy and strategies to ensure appropriate care for this diverse group as they proceed to old age.