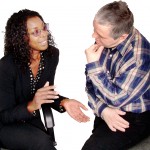 A couple of years ago, I was involved in some work commissioned by the General Medical Council to create a website for doctors to help them to understand their duties under GMC guidance. Amongst the many striking things about this work was some video on the site taken of some doctors in training, attending a session run by some self advocates and family members about ways to communicate with people with learning disabilities who may be unwell. There were powerful messages from the self-advocates and carers, but equally the young doctors to be were taking these on board and there were lots of clips showing the impact this session had immediately had. The key question is always how to maintain this knowledge and have it reflected in practice throughout their careers.

The researchers in this study set out to look at the attitudes of medical students towards people with learning disabilities. The researchers began with the idea that knowledge and attitude will change over the course of a 14-week Neurosciences block training, which included a taught module on learning disabilities as well as the opportunity to do a relevant clinical placement.

They tested this idea by carrying out a naturalistic prospective study, A longitudinal approach, studying the attitudes of medical students in the natural setting – the London university where they were pursing their studies.

What they did was to collect data on attitudes at the beginning and the end of each of three 14-week Neurosciences training blocks during a year. They measured attitude using a self-report questionnaire, which included an amended short form of the Community Living Attitudes Scale (CLAS).

They got 136 responses, which is a rate of 35% at the beginning of the training block and 133 responses at the end of the block (34%).
They found that by the end of the training block, the students who responded had increased knowledge of the definition of learning disability. They showed generally favourable attitudes towards people with learning disabilities, but interestingly with this group, there was no significant change in attitude between the start and end of the block.

The authors conclude that the taught course, along with what amounts to limited exposure to people with learning disabilities did not appear to be enough to bring about the changes required to improve attitude, despite the fact that the course increased the medical students’ knowledge.

They suggest that increased face to face contact and “other innovative teaching methods are more likely to influence attitude in future medical practitioners.”

Evaluation of medical students’ attitudes towards people with intellectual disabilities: a naturalistic study in one medical school, Sinai A et al., in Advances in Mental Health and Intellectual Disabilities,  7, 1, 18–26