Home » Posts » Populations and settings » schools » Mental health literacy: can it be taught to teenagers? 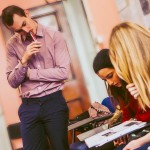 Stigma is a major problem encountered by people afflicted with mental illness. In a 2008 report published by the UK-based anti-stigma campaign Time To Change, two thirds of mental health service users reported being treated differently (in a negative way) because of their mental health problems, and a similar number reported that stigma and discrimination, and fear of these, stopped them from doing the things they would like to do. Nearly all service users (9 out of 10) agreed that stigma and discrimination had a negative impact on their lives (Time To Change, 2008). Stigma has also been shown to prevent people from seeking help for their problems in the first place (Clement et al, 2015).

Because of this pervasive negative impact of stigma, researchers have recently proposed its consideration as a fundamental cause of health inequalities (Hatzenbuehler et al, 2013). The increasing recognition of stigma as a key threat to the health of societies has driven efforts to reduce stigma through interventions. This was also the aim of the current study. Because mental health problems often arise first in adolescence, this study aimed to modify stigma and knowledge of mental illness in high school students. 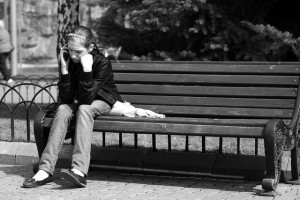 The vast majority of people who experience mental health problems say that stigma and discrimination has had a negative impact on their lives.

This study is a randomised controlled trial (RCT) of a school-based mental health literacy intervention for adolescents, to increase knowledge of mental illness and reduce stigma. The trial took place in Ottawa, Canada. All schools in the region were offered the opportunity to receive the intervention, with 30 agreeing, and 6 dropping out thereafter. Thus, the intervention took place in 24 high schools comprising 534 students who were on average a little older than 16. Each school was randomly assigned to either receive the intervention or to conduct teaching as usual. So, compared to other randomised controlled trials that assign people to treatment conditions, this cluster RCT instead assigned schools to treatment conditions.

The intervention program consisted of a six-module 4-8 week curriculum guide (including lesson plans, classroom activities etc.) that aimed to increase adolescents’ mental health literacy, by covering aspects such as stigma of mental illness, understanding mental health and illness and seeking help and support (see here http://teenmentalhealth.org/curriculum/). The program was delivered through the students’ regular teachers, who received training on how to use it appropriately.

Changes in mental health knowledge and stigma/attitudes towards mental illness were evaluated by giving students questionnaires asking about these things, right at the beginning and then after the program. These questionnaires were designed by the authors themselves, based on the material covered in their curriculum. 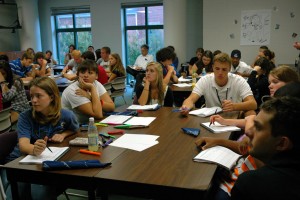 The mental health curriculum was delivered to 16-18 year olds in 24 high schools across Ottawa, Canada.

How did teachers experience their work with this program?

Teachers were asked about their experiences using the curriculum guide. Most teachers felt that the curriculum materials were engaging for the students and that they were relevant and age-appropriate. 3 out of 4 teachers felt more comfortable talking to their students about mental health after delivering the program. The same number rated the curriculum as very good or excellent. Sadly, little is known (or reported in the paper) about the experiences of the teachers who did not agree to these statements.

Did the students’ knowledge and attitudes change?

The findings on the effectiveness of the curriculum were positive. Students in the curriculum group showed a statistically significant increase in their knowledge of mental health when comparing their scores before and after the program. Students in the control group, who received teaching as usual, appeared to show the opposite tendency, although, as the change was not statistically different from zero in this group, we cannot interpret it as a decrease, but best view it as a non-significant change in knowledge. Curiously, the control group appeared to have had higher knowledge of mental health problems relative to the intervention group at the beginning of the trial, although it is not reported whether this difference was significant.

For stigma, the results were very similar. Students in the curriculum group increased in their positive attitudes from the beginning to the end of the program, whereas students who did not receive the curriculum showed no significant change.

As the authors report, the randomisation did not result in completely equal groups with regards to some characteristics. The control group included more girls, and also more students who were part of the university stream (as opposed to a college stream). When analysing the data considering the differences in stream, the results showed that the positive effects of the program were limited to students in the university stream (although, as the authors say, the numbers of college stream students may have been too low to find meaningful effects for them). It is not clear whether the differences in boy/girl ratio between the groups had any bearing on the findings, as an analysis of these is not presented.

A second additional analysis was conducted to assess the extent to which knowledge and positive attitudes of mental illness were correlated. The authors found a significant positive association between the two, interpreting this to mean that increases in knowledge predicted increases in positive attitudes. As this analysis is a cross-sectional one, we are unable to know whether this is really the case, or whether reductions in stigma facilitated greater knowledge gain. 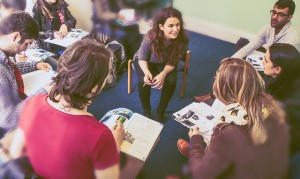 There are several important conclusions we can draw from this study.

The study curriculum seemed easy enough to integrate into pre-existing school programs, and teachers appeared overwhelmingly comfortable with delivering mental health literacy programs to their students. This is a very relevant finding, because it suggests that effective mental health literacy interventions can be embedded into the local school infrastructure.

Of course, an important question pertains to the extent that the program can be generalised to other schools. Judging by the information in the paper, the Ottawa school district already has an established “Healthy Living” curriculum, which may lend itself to integrating mental health information. This may not be the case in other schools. In addition, schools were offered the opportunity to participate, i.e. the schools included in the trial were those who volunteered to participate. It would have been extremely interesting to know how representative these schools were of all available schools in the district. This does not mean the program will not be effective in other schools (even within the schools in the study, it was randomised who did and did not receive the program), but it requires some careful thinking and planning of how to accommodate the program in different schools.

Similarly, as the authors themselves say, the program may need more adaptation for students in the college stream, who seemed to benefit less from the materials compared to students in the university stream.

On a particularly positive note, the study clearly demonstrates that stigma and attitudes towards mental health can be changed, and that such a change can be achieved through relatively inexpensive and easy-to-implement means. Of course, there are many interesting future questions to examine here:

The answers to these and many more questions are to be addressed by future studies, and such and other research on stigma will have a real impact on the well-being not only of those who experience mental illness, but every single one of us.

... and 7 more
Try out our members features!