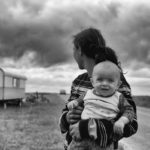 It is well-established that women in low-income households have an increased risk of developing mental health problems, in particular depression. Studies have found that these women are around twice as likely to develop the disorder compared with those from higher-income households (Hobfoll et al, 1995). Low-income women are also less likely to seek and receive appropriate treatment, in part because of the associated costs (Lennon et al, 2001).

For women who are mothers, this is especially consequential: parental depression has been linked with developmental, emotional and mental health problems in children (McDaniel et al., 2013). In the United States this has been highlighted as a public health concern, and it is increasingly being recognised that community-based services offer valuable opportunities to reach those for whom help is less accessible.

Head Start is a US government-funded service aimed at families at or below the federal poverty level with young children under five. They use a case-management structure to establish a healthy family environment in order to look after the child’s development and wellbeing. Depression affects almost half of the mothers at Head Start. A recent study by Silverstein et al. (2017) examines the efficacy of embedding a depression prevention strategy in the Head Start program. 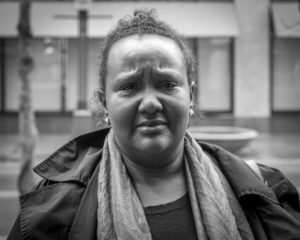 Depression in low-income mothers is a public health concern.

Silverstein and colleagues conducted a randomised controlled trial within six Head Start centres in Boston, Massachusetts. From these services they recruited at-risk mothers, defined as those either currently experiencing low mood or anhedonia, or with a recent history of depression (according to a diagnostic interview). As this study was focusing on prevention, those identified as currently experiencing a major depressive episode (MDE) were excluded, along with those with high levels of suicidal ideation.

230 participants were randomised to receive either a problem-solving education (PSE) intervention or the usual Head Start services, and followed up for 12 months.

The primary outcomes were problem-solving skills at 6 and 12 months, and depressive symptoms as measured by the Quick Inventory of Depressive Symptoms bi-monthly (QIDS). However, rather than focusing on continuous scores, the authors operationalised depressive symptoms as the number of times throughout the study that the individual’s QIDS score equalled or surpassed the moderately severe threshold of 11, called ‘symptom elevations’. This was standardised according to the number of assessments completed. 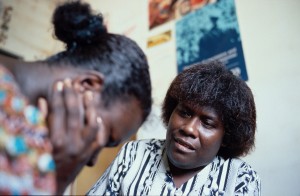 The intervention focused on building problem-solving skills in one-on-one sessions.

Although mean depressive symptoms did not differ between the two groups at baseline, more participants in the PSE group had scores above the moderately severe threshold. The authors therefore conducted additional stratified analyses with two groups: high (11 and above) and low (below 11) baseline symptoms: 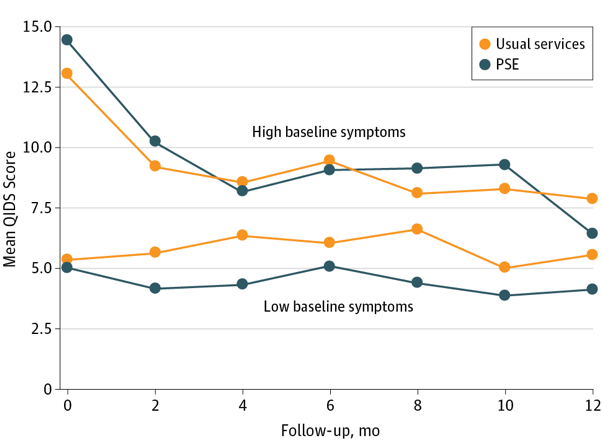 Aside from investigating a socially important and worthwhile topic, this study has a number of strengths:

However, the analysis of the study results mean the findings are overstated: 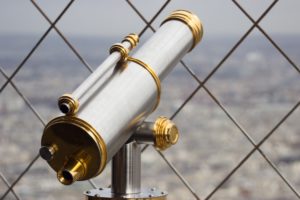 These results provide some evidence that this problem-solving education (PSE) intervention could reduce depressive symptoms and prevent their worsening. Whilst evidence in the sample as a whole is not very strong, the case becomes more convincing when looking only at those with low depressive symptoms at baseline. This is in line with the intervention being aimed at prevention; it may be that a more intensive treatment approach (for example, longer sessions) is needed for those already showing moderate symptoms.

Whilst we must be careful not to overstate the magnitude of the effect, this study demonstrates that utilising a community-based organisation to deliver mental health interventions can be both feasible and efficacious. Community-based treatment could substantially increase the access and engagement of those living in poverty, particularly if interventions are linked with trusted services such as Head Start that do not carry the stigma specialist services do. However, in this study 22% of those originally identified as at-risk declined to be screened; finding out why may be helpful.

It is difficult to hypothesise whether similar problem-solving interventions are likely to be efficacious, because the mechanism of action of this intervention is unknown. The lack of change in problem-solving abilities seems to suggest it may be that common factors such as regular one-to-one contact with a supportive individual are responsible for the treatment effect observed, but further investigation is warranted.

Reducing and preventing depressive symptoms in mothers, particularly those already disadvantaged, is extremely valuable, with implications for the quality of life of many women as well as their children. This study is a promising step towards doing so in a more accessible way. 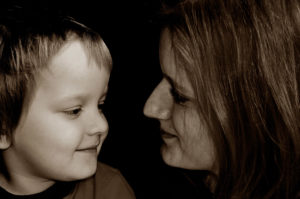 This study demonstrates that utilising a community-based organisation to deliver mental health interventions can be both feasible and efficacious.

McDaniel M, Lowenstein C. Depression in Low-Income Mothers of Young Children: Are They Getting the Treatment They Need? (PDF). Washington, DC: The Urban Institute 2013.

Last reply was October 29, 2017
Try out our members features!