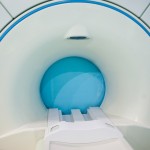 After recent posts delving off into dark woodlands of some methodologically challenging brain imaging studies, we are coming back to a more simple idea: repeatedly scanning the same people from before they develop a disorder through to receiving a diagnosis.  What is different about this study is that it was done with infants aged 6-36 months.

On average children with autism receive a diagnosis at around 4 years old.  By the time they are diagnosed there are some differences in the size and shape of their brain but the findings are a bit inconsistent and it’s not known if changes are present much earlier in development.  Finding out could both lead to a better understanding of the condition and potentially offer a clinical test early in an infant’s life.

Researchers in California are conducting a large trial, over many years, to look at how children develop.  They recruited infants who had an elder sibling with autism and some who did not.  A subset of the parents involved in the trial were willing too for their child to have at least 2 MRI scans over the first 3 years of his/her life.

The infants were scanned during natural sleep whilst in the MRI scanner.  This meant a few scans had to be repeated if the baby moved, but surprisingly few of them couldn’t tolerate the noise (through some heavy duty ear protectors).  55 were successfully scanned aged 6-9 months, 43 at 12-15 months and 42 at 18-24 months. The researchers used the ADOS instrument, alongside clinical judgement and observation to diagnose autism at 36 months

The researchers used a well-validated assessment, the ADOS, alongside clinical judgement and observation to diagnose autism at 36 months.

The methods used to work out the size of the brain were industry standard but it was only after a radiologist looking at the scans noticed a specific problem with one scan that an additional test was added.  This test was to measure the amount of fluid around the brain and was done manually by researchers not aware of the group status of the child.  This test achieved a very high (and slightly suspicious) inter-rater reliability of 99%.

Statistically they carefully controlled for age, sex and weight at each time point and allowed for the children to have different developmental trajectories in the models they tested for significance.

Children who were diagnosed with autism had

The authors suggest that the abnormal circulation of cerebrospinal fluid during brain development may have a role in the development of autism.

Although we believe that the findings reported here are intriguing and should be put on record, there were a number of important caveats.

The crucial one is sample size: only 10 children with autism were involved and as the authors are keen to stress,

we welcome attempts at replication. This is early stage research so doesn’t tell us anything conclusive, but it may flag up new research questions worth pursuing