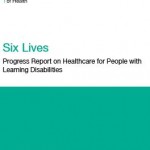 Improvements reported include for example increases in the number of people with personal budgets and in the numbers of annual health checks,  although, many people reported that these were not being done in accordance with the guidance.

However there were also many examples of things not going so well, for example people still not being given information in a way they could understand, lack of recognition of when people were in pain and people not being included in key decisions about their care.

NHS England recently appointed a National Clinical Director for Learning Disability  whose role will be to provide clinical leadership and support in the five domains of the NHS Outcomes Framework, set out in objectives in the recent NHS  Mandate and the report calls on the Clinical Director to look at the feasibility of developing best practice guidelines for the treatment of people with learning disabilities.

As part of the consultation process, the DH worked with BILD and Mencap to find out directly from people with learning disabilities and family carers about their experiences of healthcare services. In addition the publication of the DH report, BILD and Mencap have produced a report of the consultation and a series of videos called Getting Better? They have also published the results of an online survey.

BILD and Mencap Getting Better? videos