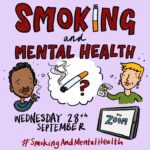 We have something a little different today from the usual elf blog. It’s an event summary written by Prof Carolyn Chew-Graham.

Over fifty people participated in a webinar, funded by National Institute for Health Research “Three Schools” (Primary Care, Public Health and Social Care) on Wednesday 28th September 2022. The Mental Elf had done all the hard work setting up the webinar and Tom Bailey, artist, provided illustrations throughout the morning.

Carolyn Chew-Graham, a GP academic, outlined, the broad aims of the workshop:

Mike Clarke identified the key reasons we were discussing this topic: 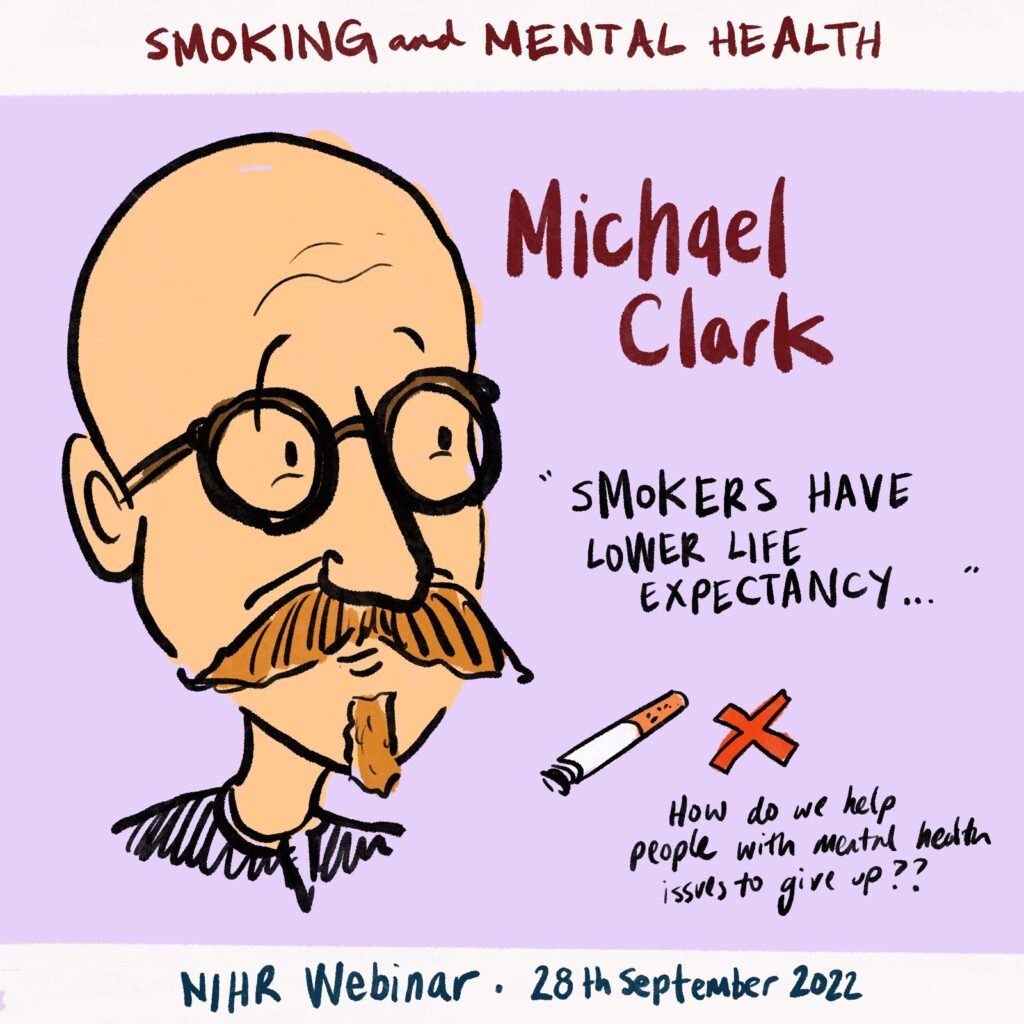 We used a poem, read by Phil and Simon Hough, to stimulate discussion:

“Just one drag is all I ask, That will help me through.

If I don’t find a cigarette, I don’t know what I’ll do.

I want to quit smoking, I know that I could.

But the way I’m feeling, I don’t know if I should.”

The first cigarette of the day was described as incredibly important by webinar participants and folk on Twitter. 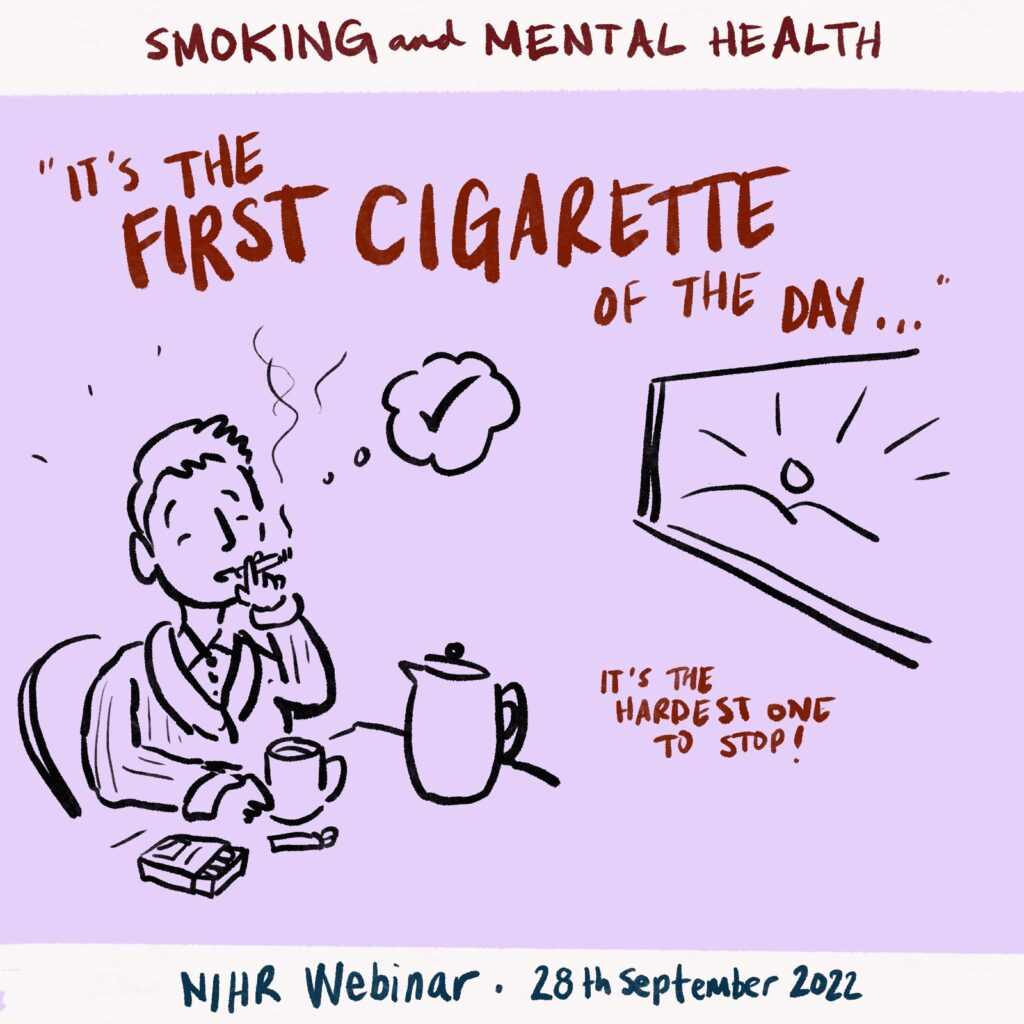 “The first cigarette of the day – it’s the hardest one to stop!”

The attitude that “smoking is their only pleasure” was thought to still be prevalent amongst healthcare professionals.

David Shiers talked about his experiences as a carer and how people with severe mental health problems in the 1970s and 1980s could be “fattened, flattened and forgotten” by their illness, prescribed drugs and their environment. People with severe mental illness have been historically (and are still) more likely to smoke than the general population, and if they don’t smoke themselves, might be passive smokers – in asylums, in community housing and on hospital wards. David emphasised that smoking and exposure to smoking was/is not a “lifestyle choice” and the term should be avoided. 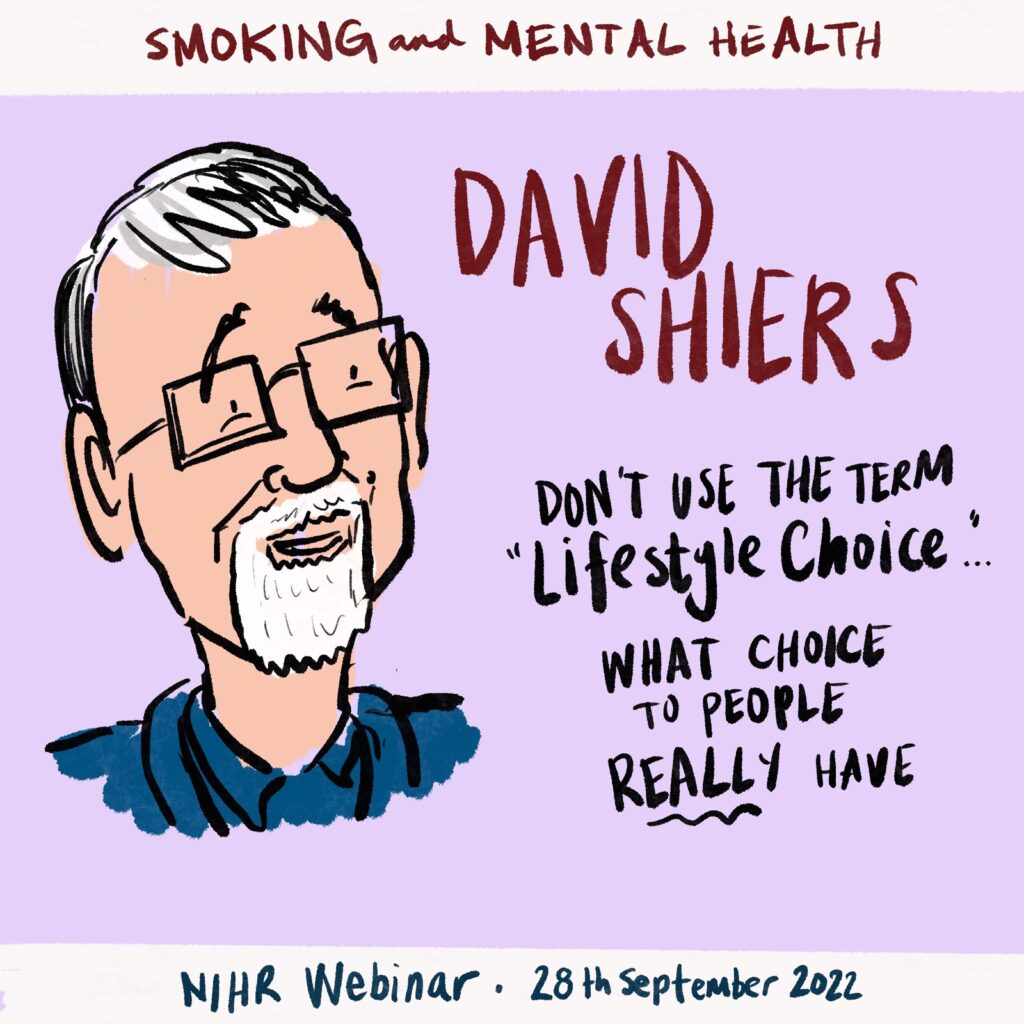 “Don’t use the term ‘lifestyle choice’. What choice do people really have?” – David Shiers.

Simon and Phil Hough talked about the challenges of being a person with a mental health problem who smoked and might wish to stop, or might be being advised, (?) told, to stop smoking by a family carer. That carer also faces challenges – do they collude with the person they support by buying cigarettes, or do they challenge the habit of smoking, but risk the wrath of the person who is craving a cigarette? 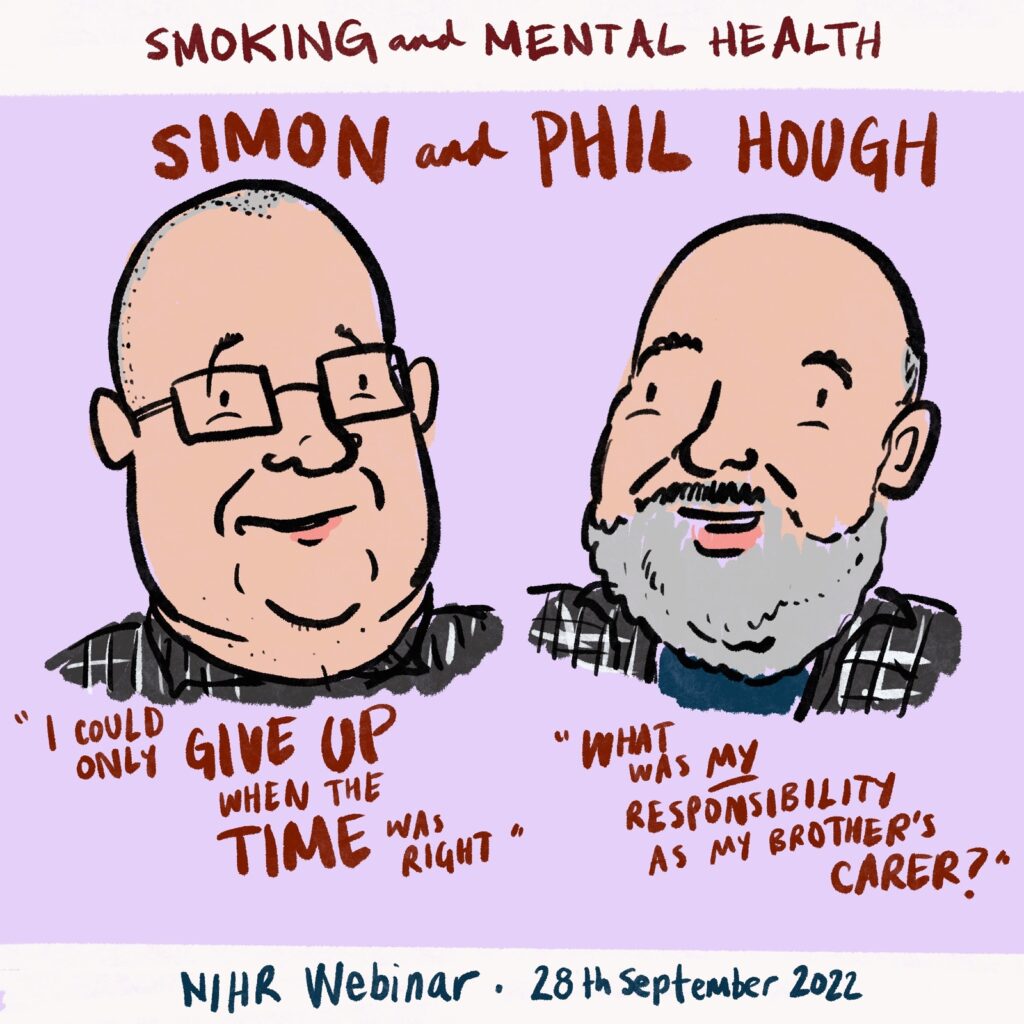 Simon and Phil Hough, speaking at the Smoking and Mental Health webinar about their lived experience.

During our first breakout room we discussed the challenges we could consider in supporting people with SMI reduce/stop smoking; each group fed back three keywords. 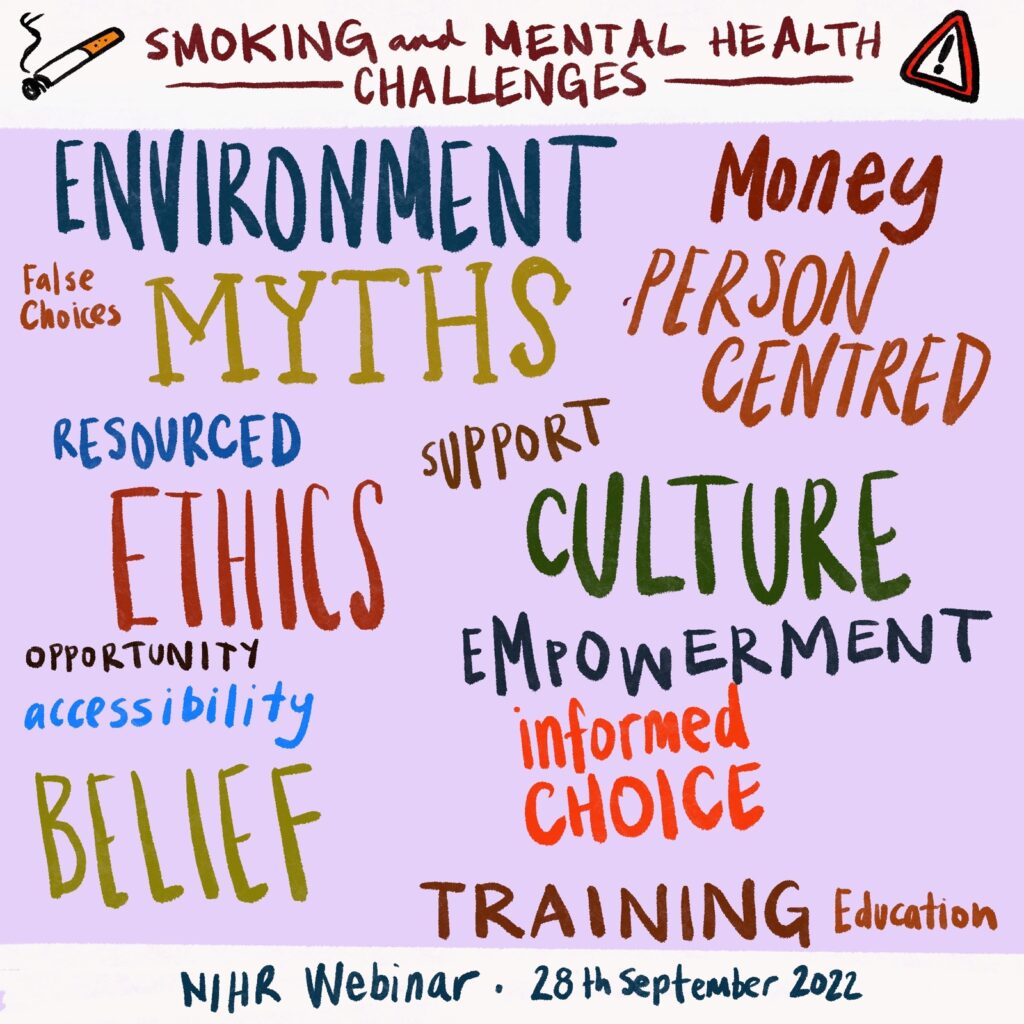 Smoking and Mental Health: the challenges 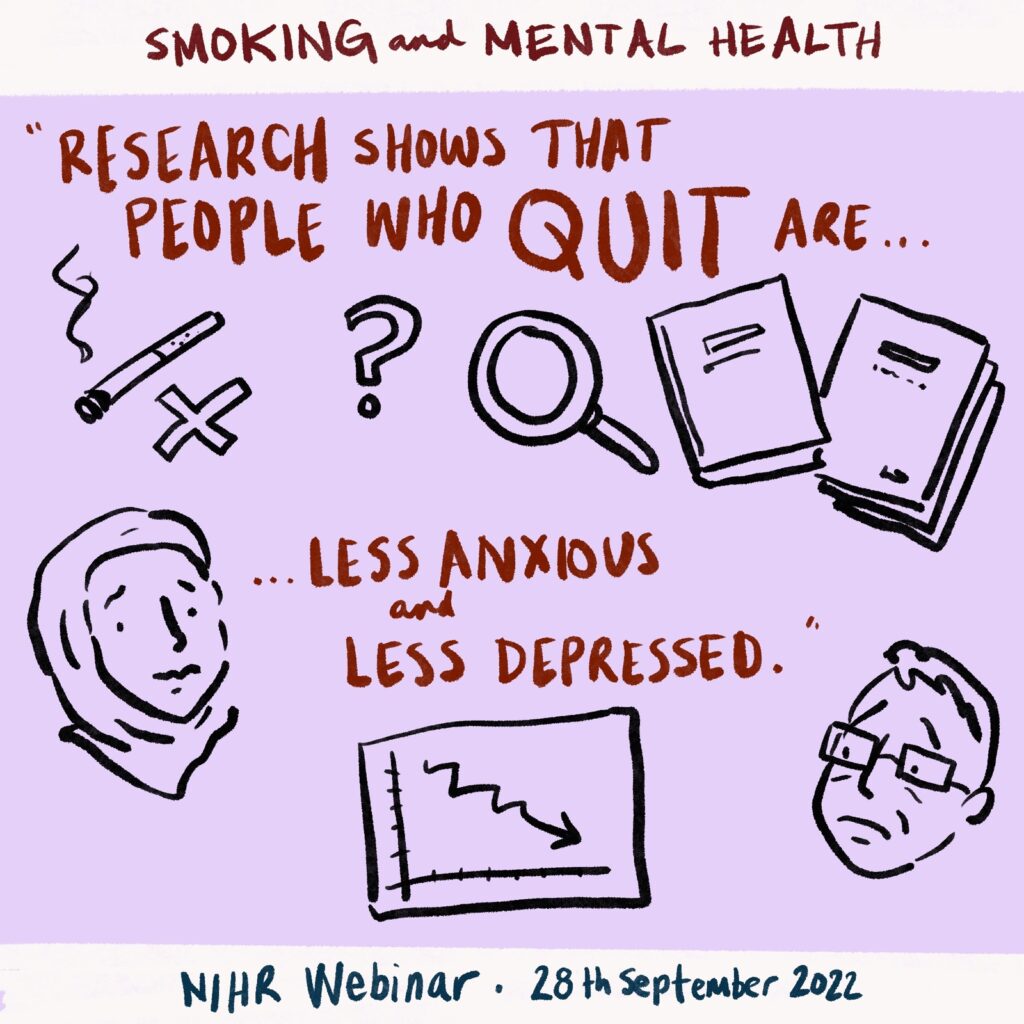 The 2021 Cochrane review shows that mental health does not get worse when people quit smoking. In fact, for many people, stopping smoking is linked with improvements in anxiety and depression.

Emily Peckham summarised the SCIMITAR study (Gilbody et al, 2019) which demonstrated that many people with severe mental health problems do wish to reduce or stop smoking, but may not have found standard smoking cessation services acceptable or helpful. The SCIMITAR intervention is flexible and person-centred, and includes review of medication – as dose may need to be reviewed. The SCIMITAR study was included in a NICE guideline (NG209 – Tobacco: preventing uptake, promoting quitting and treating dependence). Emily described how she is working with NHS England and NHS Improvement to develop standard treatment protocol and treatment pathways to ensure people with SMI receive an appropriate smoking cessation intervention. 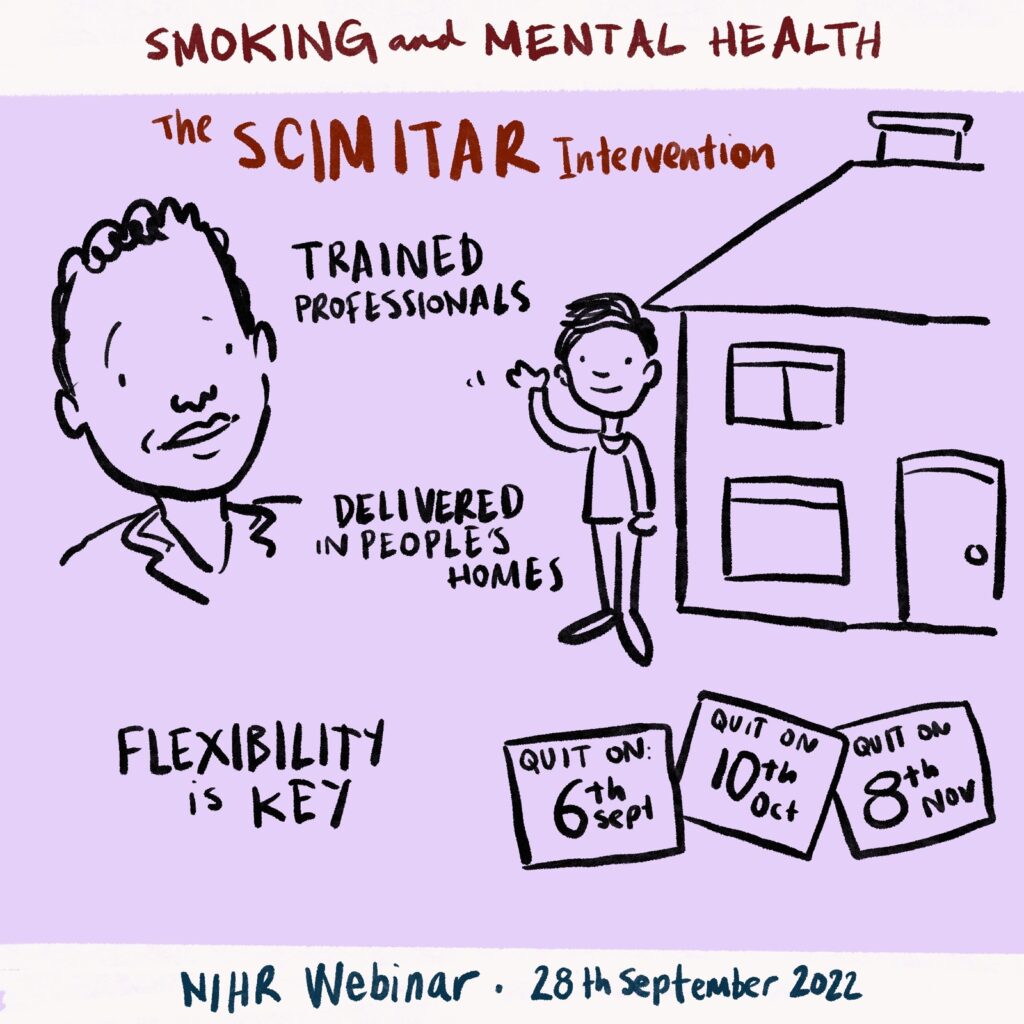 The SCIMITAR intervention for smoking cessation in people with severe mental illness.

During our second breakout room we discussed research priorities around smoking and mental health; each group fed back one research question.

It was felt that ‘SMI” is too broad and research is needed to find out which groups of people, with which diagnoses, do best with which smoking cessation intervention.

The need for qualitative research was identified which would help us understand the challenges faced by people with mental health problems and trying to reduce or stop smoking. Qualitative work with health professionals might help us unpick the attitudes held which can be a barrier to supporting patients/clients who might wish to reduce or stop smoking.

Other questions suggested were: 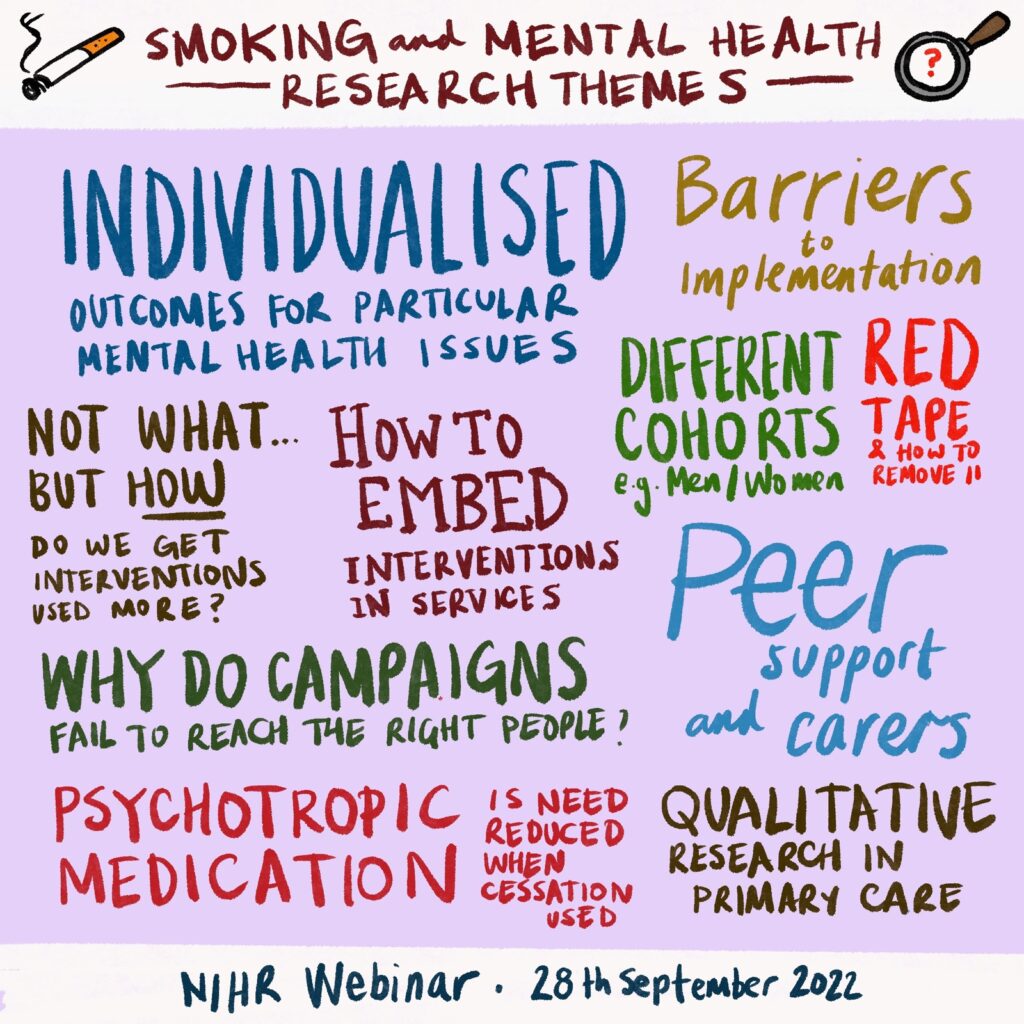 We had an extremely active Twitter chat (and ‘chat ‘in the Zoom webinar), which was summed up by Laura Hemming who live tweeted for The Mental Elf. You can look at the #SmokingAndMentalHealth Twitter thread here.

Finally, Wendy Burn (from Equally Well) and Simon Gilbody (from the Closing The Gap Network) provided brief reflections on the morning and suggested ways to take this important work forwards. 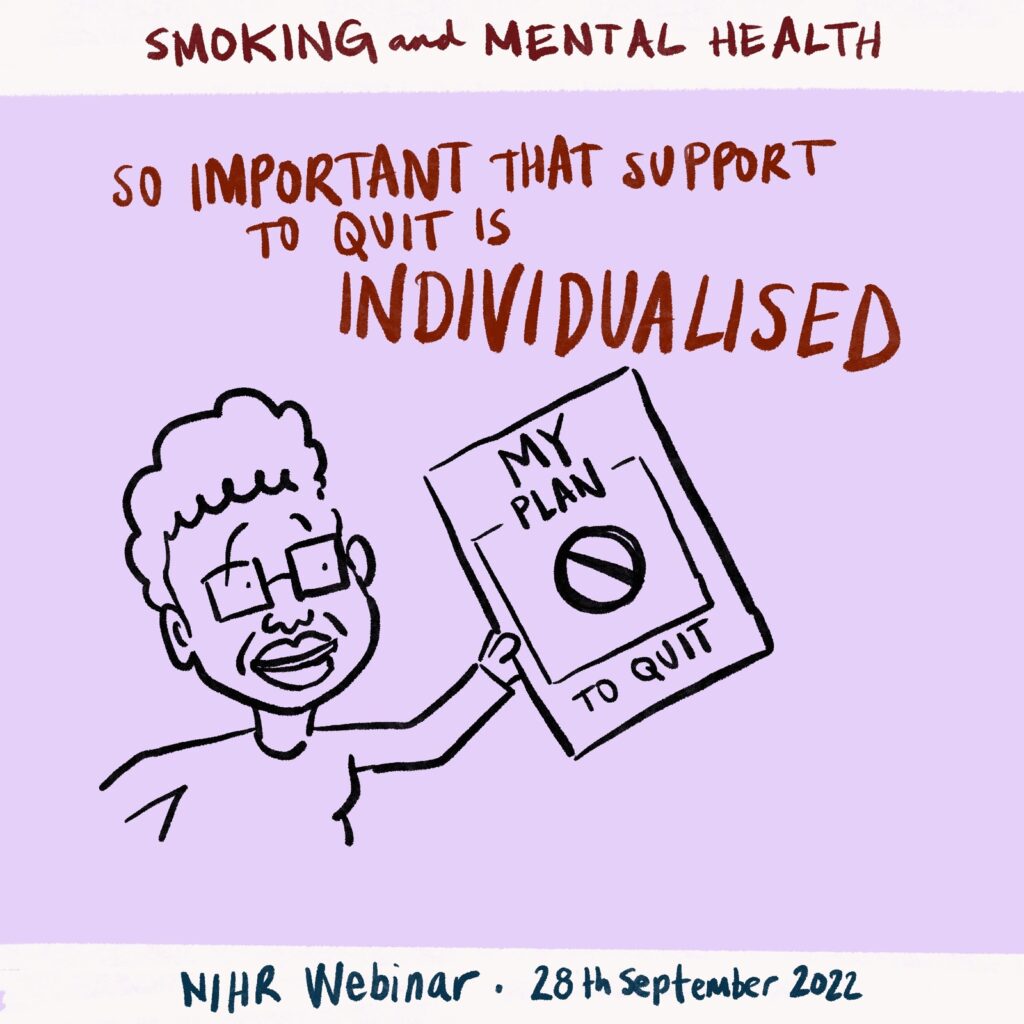 It’s important that we personalise the support we give to people with severe mental illness when they’re trying to stop smoking.

The webinar is not the end of this work, but the beginning – working with Mental Elf we aim to produce a number of other outputs…watch this space….