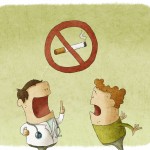 The prevalence of smoking among patients in emergency departments (ED) is reported to be higher than in the general population, so encouraging smoking cessation in these settings has been recommended. However, 57% of ED staff believe that smoking cessation treatments are inappropriate for the ED setting, citing time constraints, lack of patient interest and treatment ineffectiveness as the main causes of these beliefs (Tong et al., 2010).

A systematic review published in the American Journal of Emergency Medicine (Pelletier et al., 2014), has recently analysed the most up to date research on the effectiveness, feasibility and appropriateness of smoking cessation interventions in ED settings.

The primary outcome measure was:

The authors included all original studies of smoking cessation interventions performed in either adult or paediatric ED settings that assessed at least one of the outcome measures outlined above.

One investigator conducted the literature search (on the Medline and CINAHL databases), identifying 17 articles which were then examined for sources of bias (such as lack of randomisation, non-blinding of participants or study personnel and incomplete outcome data reporting). Four studies were excluded due to a high or unclear risk of bias, leaving 13 studies to undergo full systematic review.

Although a meta-analysis of these studies was planned, their heterogeneity precluded this and therefore only a systematic review was conducted. All studies were also rated on a three point scale for quality, using 19 quality criteria questions. This review looked at a range of interventions for helping people to quit smoking in the emergency setting.

Of the 13 studies, 11 were conducted in the USA, one in Germany and one in Turkey. Six studies used a single time-point follow-up for assessing smoking cessation, three had two follow-ups, three studies had three follow-ups and one had four follow-ups.

The smoking cessation interventions varied between studies and fell into six broad categories:

Eleven studies included at least two of these interventions and there was no consistent control group across the studies.

The main findings of the systematic review were as follows: Most studies found no difference between intervention and control groups in terms of cessation rates.

The authors of this systematic review conclude that:

ED-based cessation interventions may be effective, but the available data are somewhat limited and heterogeneous.

Only two of the 13 studies included in the review found any benefit of smoking cessation intervention in the ED settings, with both using motivational interviewing. This led the authors of this review to further conclude that:

Motivational interviewing may prove to be a promising strategy where feasible.

However, it is important to note that four of the six studies which used motivational interviewing did not find any beneficial effect of this intervention.

The authors recommend that: The evidence-base is not yet of sufficient quality for us to draw any conclusions about the best course of action for smoking cessation in emergency departments. The reviewers could have done more to find studies to include in their review.

Last reply was October 20, 2014
Try out our members features!