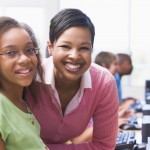 Picture the scene: adolescent boy with an absentee father, trying to fend off a large crowd of men who occupy his house, cost him a lot in food and drink and are all determined to marry his mother. He is young, inexperienced, lacking in confidence and besieged by problems. In short, he needs a mentor. One arrives; the first, in fact, for this is Homer’s story of Odysseus’ son Telemachus, to whom help comes in the form of Odysseus’ friend Mentor, or rather the goddess Athena disguised as the old man.

Mentoring has changed somewhat since Homer introduced us to it; not too many goddesses available to take on the role. These days it often features within national and local strategies for working with young people in the UK, although few evaluations of youth mentoring have been conducted. Mentoring is defined in various ways and can take a number of forms. The Cochrane Collaboration’s Drugs and Alcohol Group set out to examine the evidence for mentoring interventions aimed at deterring drug and alcohol use, using the definition of the Centre for Substance Use prevention 2000, as a supportive relationship in which one person offers support, guidance and assistance to the partner, based on the sharing of experience and expertise without expectation of personal gain by the mentor.

Through a systematic search of relevant databases, as well as consultation with experts and reference list checking, the reviewers looked for randomised controlled trials (RCTs) in which non-users of alcohol and drugs, aged 13 to 18, were assigned to a mentoring intervention or a control group (other intervention or none).

Four RCTs from the USA, involving 1,994 adolescents, were included. The RCTs tested three interventions; all conducted their mentoring activity with community mentors and in the community, with two implementing one part of the programme in schools. All studies included a high proportion of minority and disadvantaged participants; one study only recruited adolescents from single parent households, as that was a precondition of the programme. Data was pooled where appropriate.

The evidence is weakened by the lack of information in the studies about how randomisation was conducted and how allocation was concealed; most assessments of risk of bias factors were unclear. Substance use was assessed by self-report, without biochemical verification. These trials involved formal mentoring programme so the work of informal mentors remains unassessed.

There is no evidence at low risk of bias to say that the efforts of the organisations, the mentors and the associated community activities resulted in less alcohol or drug use.

Today’s blog (this page) comes courtesy of my elfin cousin the Lifestyle Elf who has been working feverishly over the last few weeks preparing her own website for launch in April.  Those of you who have an interest in healthy lifestyle, health promotion and public health will be well advised to sign up to her regular blogs when they soon go live.